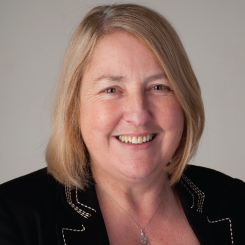 Angela O’Donoghue doesn’t see herself as ambitious. In fact, the principal of South Essex College, who has set up a Sixth Form College from scratch and been awarded a CBE, considers herself having always been “lucky”.

She has a reputation for reaching out to people, from teaching excluded schoolgirls to blind and disabled students, as well as helping forge a way for women getting into construction and engineering.

But the 56-year-old simply views work as a pleasure and has “loved every minute of it”.

Growing up in a close-knit Catholic family with five brothers and sisters in Rock Ferry, near Liverpool, O’Donoghue was taught by nuns at Birkenhead grammar and visited church every Sunday.

“We didn’t have a lot of money, but it was an idyllic childhood,” she says.

“My father was strict but there was a lot of love and that has an impact on you the rest of your life. It taught me compassion and that one of the reasons you are here is to be supportive to the people around you.”

Her father was a transport manager before working at an FE college himself, but it was O’Donoghue’s mother who really left her mark.

While her father didn’t really want his wife to work, she set-up a luncheon club. By the time she finished she had premises and was voluntarily producing 150 meals a day.

“She ran it until she was 76,” O’Donoghue says proudly.

“If she’d been in a different era she would have been a very successful career woman but she wasn’t, so she was a community leader.

“It’s what women do differently that brings an added dimension — that’s what my mother taught me.

“The attributes women bring, in emotional intelligence and how to get people behind you, are the things they should build on. Women do it really well — they just need the confidence to know they can.”

After training as a biology teacher at what is now Liverpool Hope University, O’Donoghue became pregnant with her daughter, Clare, when she was 22.

But unable to stay away from the classroom, she picked up work again just two years later, teaching biology as well as maths to pupils described to her at the time as those “no one else wanted to teach”.

“Our principal was forward-thinking and had bid to get a new wing for learners with physical disabilities and visual or hearing impairment,” says O’Donoghue of her time at Liverpool’s Mill Brook College which eventually became Liverpool Community College.

That’s normal now, she says, but this was 1981 and it was the first college in the country to bring the group into mainstream provision.

“I had one biology class with someone who was totally blind and two with visual impairments and I remember thinking ‘how the hell am I going to teach a visual subject to someone with no vision?’ It got me to think in a completely different way and was a real challenge,” adds O’Donoghue.

The feedback from other learners was that teaching was better because she had to “teach very carefully and clearly”.

At the age of just 26, and having survived a number of mergers, O’Donoghue ended up heading provision for learning and learning disabilities across the college.

She said the impact she had on young people’s lives drove her because she was working with those “no one else was interested in”, such as girls with serious behavioural problems.

“Many had been in care or had been put in a special school just because they told a teacher to ‘eff off’,” she says.

“They often didn’t respect teachers and I thought, well, why would they? Some were homeless and I would try to help them — I was interested in them as individuals. People respond if you take an interest in them, don’t they?”

Among the restructures, she was next asked to take over science, technology and health with engineering and construction.

“I knew nothing about it,” recalls O’Donoghue.

“They wanted me to go in there and completely change the male-dominated environment.

“People didn’t like it at first, they’d say ‘what do you know?’ There weren’t even female toilets, but by the time I left in the late Eighties I had a great deal of respect from those people, which was really good for me.”

How did she really win them around?

“People say they like me because I say things just like they are, perhaps that’s the Scouser in me,” she says.

“I’m straight with people — but what I love is people, all different types.”

O’Donoghue helped recruit women to train in electrical installation and says they would challenge men about their attitudes, gradually changing the dynamic.

Following yet another restructure she decided she wasn’t “going through this again” so started to look outside Liverpool and got a job at Wigan and Leigh College, ending up as acting principal.

Yet as her career continued to soar it was during these years O’Donoghue faced the darkest years of her life.

At the age of 39, and after being a carer for nine years, she lost her husband Mick to pancreatitis.

The pair met as youngsters in Rock Ferry, down the road from where her father had worked, but when Mick was just 35 he developed the condition from a cyst on his pancreas.

“My career in a way was my escapism from being a carer,” she says.

“He had been so seriously ill, going out to work during the day kept my sanity.

“There were times when it was really difficult. Sometimes I would come home and then go straight to hospital, but you just manage your life, don’t you?

“In the evenings he would be in bed and I could do some extra work — we had a routine and it worked.”

It was 12 months after her husband died that O’Donoghue decided to move.

“It was time to let go — I needed to make a big change in my life so I moved to Hackney,” she says.

It was here O’Donoghue helped create the Brooke House sixth form college, under former Home Secretary David Blunkett’s vision for such an institution in every town.

“I loved the buzz of Hackney — all the young people were so appreciative and I learned every aspect of how a college runs.”

Never one to sit still O’Donoghue, after five years, went on to Sunderland College where she said her team turned around results so fast, they “wiped out the competition”.

But having worked her magic back up north, just six months ago O’Donoghue decided to settle in Essex where her daughter and granddaughter live.

She says she still doesn’t know who put her forward for her CBE — for services to FE — announced this year.

“That’s what touched me the most — that someone would take the time to nominate me. It was such a privilege that someone recognised the work I’ve done,” says O’Donoghue.

“When I think about those girls I worked with back in Liverpool all those years ago, they are productive members of society with their own families and jobs, making major contributions and it was FE that did it for them. Otherwise they would have been in and out of prison.

“I think the contribution FE colleges make is huge and I’ve loved every minute.

“We’re the sector that give people second, third and fourth chances.”

Tess of the d’Urbervilles by Thomas Hardy