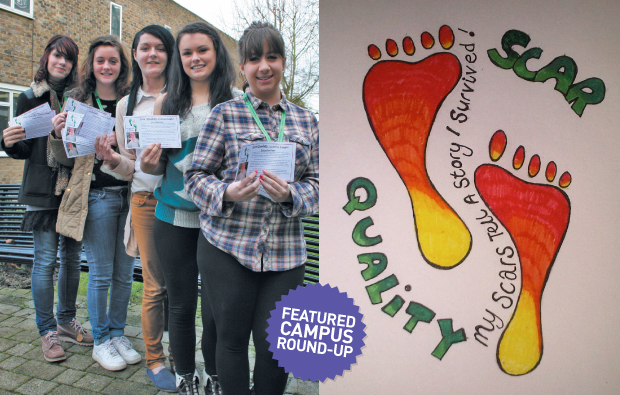 A London health and social care student has persuaded her classmates to go the extra mile to support burns victims by setting up a charity.

Vicky Knight, 17, from Dagenham, was the victim of a horrific arson attack on her family’s pub when she was just eight years old. It left her with 33 per cent burns to her upper body and limited use of her hands.

As well as the physical scarring, Vicky also struggled with low self-esteem and bullying at school and said she found little support for her and her family.

She said: “It started a few weeks ago when I was giving a talk at college about my accident and my tutor Jackie said ‘why don’t you set up a charity to help people who have been injured?’

“At first I thought ‘nah, I can’t be bothered with all that work,’ but then I started to think that really there should be more support out there.”

She added: “It was nice of my friends to offer to help and support me. They all have their own roles and one of them even helped to design my logo.”

The charity aims to provide a support network for burns victims of all ages as well as helping to fund wigs, creams, specialised cutlery, days out, counselling and mentor groups.

The group is planning various events to raise awareness of the charity and generate funds, including a 28–mile sponsored walk from Dagenham to Southend on Sunday March 3.

“Thank you to everyone who’s doing the sponsored walk. It’s mad how much support people can give, even people who don’t know me.”

But, Vicky said, it wasn’t just victims themselves who need support. She said: “When I told my parents about Scar Quality, they said ‘it’s amazing what you can do’.

“There wasn’t much support for them when I was in hospital. My mum asked to see a picture of someone with similar injuries to mine, so she could see how I would look, and they said they couldn’t show it to her. I really want to help families like mine.”

Vicky also hopes to provide make-over photo shoots to help improve confidence and self-esteem, something she said would
have helped her in the first few years
following the attack.

She said: “I want to help people who have been the victims of fire, like me, but I also want to raise awareness of the damage it can do — not only physically but mentally too. When my accident happened there wasn’t much support other than my own network of family and friends. I’m hoping now, with Scar Quality, some good will come out of the tragedy that happened to me and my family.

“I want this to go on beyond the end of
my diploma, I can definitely see it lasting
a long time.”