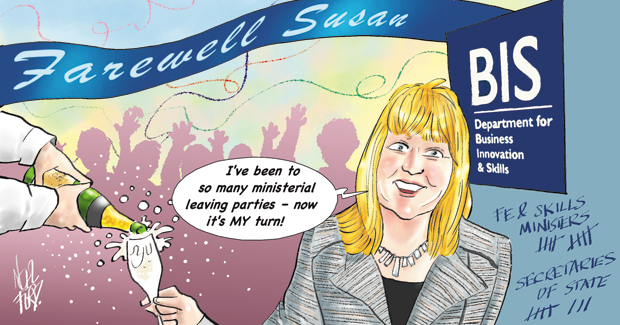 The retiring head of further education and skills investment at the Department for Business, Innovation and Skills has told how simply helping learners has been among the highlights of her six-year spell in the post.

Dr Susan Pember, who got an OBE in 2000 for services to FE, has announced plans to retire on April 4.

A host of sector figures have line up to pay tribute to the top civil servant, describing her as “hard to replace,” a “good role model,” and “scrupulously fair”.

Dr Pember, speaking exclusively to FE Week, said: “I have supported ten FE and skills ministers and eight secretaries of state, and working with ministers and stakeholders to develop new policy has been the best bit.

“The areas I am most proud of are those directly related to improving the experience of learners, like Skills for Life, or ensuring adult learning’s economic and social value is fully understood.”

She also spoke of the “privilege” of encountering “dynamic” learners and teaching staff when visiting colleges and other training providers.

“I have witnessed inspirational teaching and met many gifted students, trainees and exceptionally committed staff,” she added.

“I will miss my staff, who are brilliant and really understand the needs of the sector, but I am very excited about what the future can offer.”

She will be sorely missed, but I do hope she will continue to be involved in the work of colleges.”

Dr Pember joined the then-Department for Education and Skills in 2000 as director of adult basic skills strategy, before taking up her current position in 2006.

She had begun her career as a lecturer and later became a senior education officer, before taking over as principal at Canterbury College.

FE minister Matthew Hancock MP tweeted his reaction to her retirement, saying: “She will be hard to replace.”

She said: “Susan Pember’s career story brought home to us what a great force she has been in the sector for such a long time and what a good role model for aspiring women.”

Association of Colleges chief executive Martin Doel said: “Colleges, their students and FE generally have benefited hugely from Susan’s advocacy and know-how at the highest levels of government.

“She will be sorely missed, but I do hope she will continue to be involved in the work of colleges.”

Lynne Sedgmore, 157 Group executive director, said: “Sue has long been a passionate advocate for and challenger of FE colleges and the wider Learning and skills sector.

“Her experience as a principal stood her in good stead as a well informed and effective civil servant. Her work on basic skills was exemplary and she will be missed.”

Graham Hoyle, chief executive of the Association of Employment and Learning Providers, praised her “scrupulously fair” dealings across the sector, adding: “Sue has been instrumental in ensuring the door of successive administrations has been open to work-based learning providers to put their case to ministers. Her advice has been greatly valued during challenging times.”

David Hughes, chief executive of the National Institute of Adult Continuing Education, said: “I have worked with Susan for a long time and will miss her commitment to FE and learners within the machine.
“She has long been a strong voice and advocate for the sector within government, ensuring new ministers appreciate the importance of adult learning.”