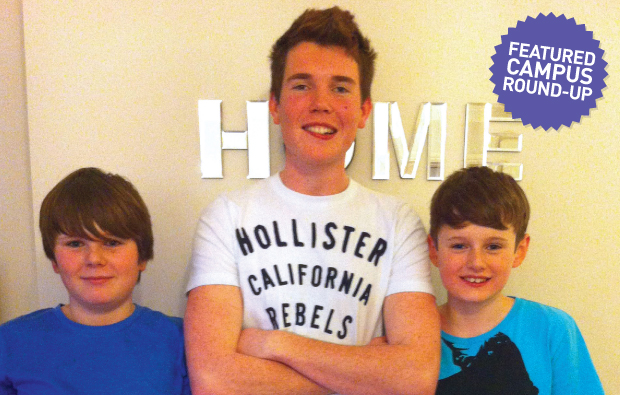 An intrepid outdoor activity student will be on top of the world if he can complete the North Pole Marathon and raise £20,000 for the cardiac unit which saved his little brother’s life.

Tom Jenner, 19 and from Flitch Green in Essex, who studies at the University of Derby Buxton, is aiming to run 26 miles across the Arctic in the hope of raising thousands of pounds for Great Ormond Street Hospital.

He said: “In 2010 my little brother Ollie, who is now 11, was diagnosed with Wolff-Parkinson-White Syndrome, a rare and potentially fatal heart condition. They decided Ollie needed open heart surgery which thankfully was a complete success.

“If he hadn’t been given this rare diagnosis he would have died, so running the North Pole Marathon is my way of giving something back to the staff of Great Ormond Street Hospital for what they have done for my family.”

Wolff-Parkinson-White Syndrome occurs in only around four out of 100,000 people, and is caused by an extra pathway that the electrical impulses in the heart follow.

This in turn can lead to an irregular heart rate and, when triggered by certain conditions, such as running, cold, stress or shock, can cause a rapid increase in the number of beats per minute.

For Ollie, this made life fairly difficult, especially as medical examinations found that he had not one but two extra pathways in his heart, making the operation to correct it even more dangerous.

Tom now wants to show his gratitude by taking on one of the most physically demanding marathons in the world, which only 255 runners have ever completed.

As part of his foundation degree in outdoor activities, Tom has undertaken winter skills training, and has been making the most of the recent cold weather to put in some extra preparation, despite the fact that even the coldest day this winter in the UK will feel warm compared to the chilly minus 32 degrees which temperatures can sink to during the race.

However, Tom is confident that his gruelling regime will make sure he is ready for the race, both physically and mentally.

“The only thing I can’t prepare for is polar bears,” said Tom. “But I’m really looking forward to the experience and plan to run at least a marathon a week over the next year to train.”

He hopes to run the marathon in April 2014, and needs to raise at least £12,000 to enter. Tom is seeking sponsorship to enable him to embark on the arctic marathon through his webpage www.northpolemarathon.moonfruit.com