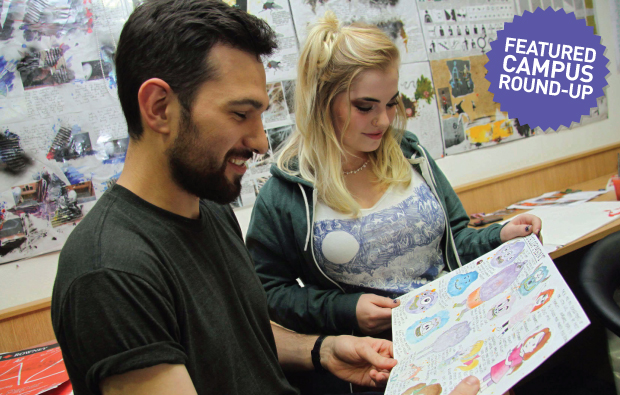 Young designers from Middlesbrough have been set the monstrous task of illustrating a local author’s books for children.

The BTec graphic design students from Cleveland College of Art & Design (CCAD) have been enlisted by Kiran Kaur to bring the characters from her books, The Draught and Puddle in a Muddle, to life.

Kiran, 28, wrote the stories for her own daughter four years ago, and they lay in a drawer gathering dust until she posted them online last year.

She said: “The inspiration for my first book all stemmed from telling my daughter ‘don’t let the draught in’ when she was coming in the house.

“She didn’t really understand and was a bit scared about letting in a ‘draught’ as though it were some kind of monster.”

This gave Kiran an idea for a story about an imaginary mischievous monster and the young girl who dreamed him up, Poppy.

To her surprise, US publishers who saw them on the internet snapped up the chance to publish them, but asked for pictures to accompany the text.

While searching for help to illustrate her work, Kiran stumbled upon a news story about a CCAD student whose artwork had been published and contacted the college.

“When Kiran got in touch I thought that this would be an excellent live brief for our students,” said CCAD graphic design illustration lecturer Tom.

“The illustration pathway is a brand new course offered to our second year graphic design students and having just completed a project on creating monsters they were already in the right creative mindset.”

Ten students were given a list of visual and physical characteristics of The Draught and Poppy and will research and sketch their ideas to give to Kiran who will pick her favourite of the students’ illustrations this month.

She said: “I definitely made the right decision coming to CCAD. What I have seen so far has been amazing – the standard has been so high.

“I initially had a picture in mind of what I thought the characters would be like, but these young designers have really opened my mind to new possibilities and it is going to be an incredibly hard decision to choose just one winner.”

The Draught is set for worldwide distribution this summer with the possibility of an animated series being developed in the future.

Illustration student Blue Lunn, 17, from Saltburn, said: “It is very exciting having such a high profile brief.

“It is quite difficult to come up with ideas that match the clients but we have been given a lot of freedom to put our own stamp on the work.

“Winning a competition and seeing your work published all over the world would be an incredible honour.”