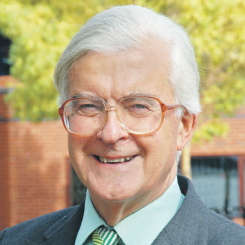 “I was once depicted as a lion,” beams former education secretary Lord Baker on his appearances in satire, most notably on TV show Spitting Image.

“Occasionally I appeared as an eagle, then an asp, a snail and of course a slug, but my very favourite was as a Cheshire cat because as the cat disappeared, all that was left was a smile and I was always seen as a very cheerful minister.

“It doesn’t matter, though, you haven’t got to be worried how you’re going to be caricatured — strong personalities don’t worry about that.”

Born in Newport, South Wales, the son of a civil servant, Lord Baker was educated at the former Hampton Grammar School and graduated from Oxford with a law degree before carrying out National Service.

He worked for Royal Dutch Shell before being elected a member of Parliament in 1968, eventually becoming secretary of state for education in Margaret Thatcher’s cabinet.

Now, aged 78, the father of the national curriculum,  Sats, league tables, as well as grant-maintained schools and city technology colleges has pushed the idea for another huge educational reform.

The Tory grandee has championed specialisation at the age of 14 in his latest book, 14-18: A Vision for Secondary Education. Primary school should end at nine followed by a stint at middle school before assessment at 14 when he believes the national curriculum should end and instead one of four pathways should be taken in technical, academic, arts and sports or a “career course”, specialising in areas such as plumbing and catering.

So why does he feel so strongly about vocational opportunities?

“I went to a good grammar school but all I remember is two hours of carpentry we had each week and I think I could still just about manage making a dove tail joint now.

“Perhaps it’s in my blood — my grandfather was a carpenter and my father liked making things with his hands. I really believe young people can learn while doing things and working together as a team — if you’re just sat in a class studying for exams you’re not really going to learn that much.”

But why has the retired politician laid out his ideas now 20 years after leaving frontline politics?

“I’ve always hankered for a change at 14. You’ve got to ask yourself why are there exams at 11 which is too young, and why 16? When I was education secretary I changed so much I couldn’t change that as well, I really couldn’t.

Margaret Thatcher was vilified, but she couldn’t care a fig for it”

“Five years ago my old friend Ron Dearing and I both decided the one thing missing was technical schools — we had them in 1945, so we reinvented a model which we then sold to Lord Adonis [the then education minister for Labour].”

University technical colleges (UTCs) were born and with five already open, 12 due to open this year, 15 in 2014, and a further 21 in the pipeline, they are growing rapidly.

“The JCB academy in Stafford did not have a single not in employment or education (NEET) leaver last year,” he says, claiming their winning formula is an employer-led and university-supported approach that provides a working day from 8.30am to 5pm for five eight-week terms. The terms mean that over a four-year period the students gain an extra teaching year.

This instils a “sense of maturity” in students who are dressed for the boardroom and which, he says, will see “truancy and disruption virtually disappear”.

“I don’t think I have much more of a career ahead at my age, but I hope by introducing this book and the UTC movement I have changed things significantly for the better,” he says.

“I thought that when I brought in the changes in the 80s but there’s no question about that as the national curriculum, testing and league tables, have led to others following on and improving it further.

“I really think I’m trying to chart a different way forward for millions of our young people. I hope I’ve shown people the way it can go and then it’s up to others to pick up the baton and continue.”

Despite his fight for a practical education Lord Baker, who is married to Mary and has three grown-up children (two daughters and a son), has proved himself as more an academic with books published on history and satire.

“I’ve always loved English and it’s enriched my life — you don’t just have to think of a job, it should be about all the things that make a happy life,” he says.

“The best teachers pass on the love of their subject like a virus, they inject it into you. It doesn’t matter what subject it is and I was lucky enough to have two teachers who did that in English and history — they inspired me and generated in me an enormous love of the subject.”

He says his lifelong passion for education came from within his family with an Irish grandmother, his wife, and several aunts and great aunts all working as teachers. “I think the Baker family rose up through the education ladder,” he says.

“All my family love reading and were very well educated — all my children went to universities — Scottish universities like their mother. They were more on the artistic and creative side.”

Reflecting on his heyday in politics he says: “I was very lucky to be one of the generation at the high table of politics in the 1980s.

“It was an incredible decade, dominated by Margaret Thatcher. She changed everything — she saved Great Britain from decline and falling down. She transformed the national spirit, bought about privatisation, sold off council houses, approved education reforms, won the Falklands. It was a wonderful time to be in politics- the most exciting time since the war.

“I’d liked to have served in Churchill’s cabinet during the war but it was also wonderful to serve in Margaret’s cabinet.”

Harking back to Spitting Image’s rubber parody puppets of the 1980s, he reflects: “Margaret Thatcher was vilified, but she couldn’t care a fig for it — it didn’t matter.

“Others that did worry like John Major and David Steel let it eat into their soul but you mustn’t let that happen — you can’t let the cartoonist win and that won’t happen if you’re confident on what you’ve done, your character and the way you behave.”

Despite turning on the popular Sunday night show for its humour in the 1990s, when he branded it “cruel,” Lord Baker’s love of political satire lives on in his collection 18th and 19th Century caricatures.

“I love satire and every politician would love to appear in a cartoon. Most MPs in the House of Commons today will probably never appear in a national cartoon because they haven’t arrived,” he says.

“Once you’ve appeared in a cartoon nationally, you’ve arrived.”

I like to go to the theatre and cinema. I read and write and like spending time with my wife and family but I don’t relax too much — you will fall off the perch.

Mary, my wife, Charles Dickens, Sydney Smith, Ted Hughes, Queen Elizabeth I and Josiah Wedgwood.  And Winston Chruchill, but he would come for lunch