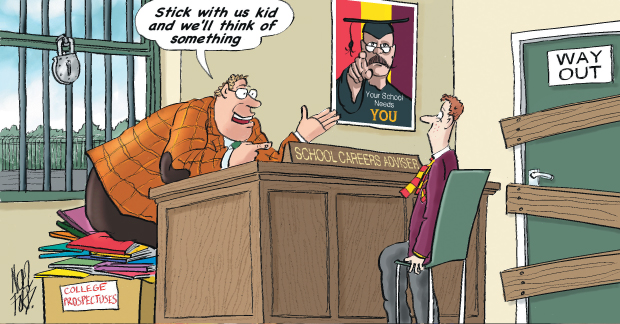 The government has been urged to “bite the bullet” and call Ofsted in to inspect careers guidance services after concerns over the quality and objectivity of advice given to young people.

Association of Colleges policy director Joy Mercer said the watchdog should look at careers guidance during school inspections following a report on the subject by the Education Select Committee.

It identified a “deterioration” in advice since the service became the responsibility of schools in September.

Committee chair Graham Stuart MP questioned the advice of schools who, he said, “put their own interests ahead of that of their pupils, restrict access to other education providers and make the filling of their sixth form places more of a priority than their statutory duty to provide independent and impartial advice and guidance for pupils.”

And the dim view on careers guidance was mirrored by Ms Mercer.

“The Departments for Education and Business, Innovation and Skills need to bite the bullet and encourage the regulator to include careers guidance in its regular inspection of schools,” she said.

“The committee has recognised that careers advice must be delivered by qualified staff and schools should hold the matrix standard. This would mirror colleges’ service to their students.”

He added: “Receiving ill-informed, inappropriate career guidance can have an extensive impact on young peoples’ lives, and in turn hinder business and the wider economy.

“What we now need are careers counsellors that are given appropriate training to a recognised standard.

“In addition, colleges and training providers must be better linked with local employers and local enterprise partnerships, to ensure young people have access to high quality work experience.”

Lynne Sedgmore, executive director of the 157 Group, said: “The committee’s conclusions about the state of guidance in schools are worrying.”

However, a Department for Education (DfE) spokesperson said it was too early to judge how careers guidance was delivered with the new system having “only been in place for a term”.

The committee looked at how careers guidance was affected by the Education Act 2011, which saw provision of the service shift from the duty of local authorities and delivered by Connexions, itself described by the DfE as “often costly, patchy and of poor quality.”

The committee heard from a number of education sector big-hitters, including Dr Deirdre Hughes, chair of the National Careers Council, who said there was a potential loss of £28bn to the UK economy if young people were not given the right career guidance.

“We have concerns about the consistency, quality, independence and impartiality of careers guidance now being offered to young people,” said the committee report, which said the transfer of responsibility for careers guidance to schools was “regrettable”.

Committee chair Mr Stuart called for the National Careers Service (NCS), which he described as “a great innovation for adults,” to be extended to support schools.

He said: “We found that the quality and quantity of guidance for young people is deteriorating.”

He also called for schools to produce annual careers plans to “ensure they can be held accountable for what they do”.

A DfE spokesperson said: “We introduced this new duty [on schools to provide careers guidance] to replace the previous system that was often costly, patchy and of poor quality.

“The duty requires schools to secure independent and impartial careers guidance for their pupils.

“We want head teachers to decide what careers guidance is right for their students and have control over their budgets to provide it. The duty has only been in place for a term — far too early to pass judgment on
its success.”

Sixth forms are part of an increasingly competitive market, in which every 16 to 18-year-old learner represents three to five thousand pounds.

If you were running a business would you promote the competition?

Perhaps, but schools would still have budgets to protect, and where would this army of advisers come from?

Then there’s the thorny issue of paying for them – what services would have to miss out?

A good place to start would be promoting their success at getting learners into work with training.

Every FE provider website should have easy access to progression and destination data, which is also shouted about in the course prospectus and,
for example, the back of buses.

Expecting schools to refer learners is wishful thinking, you’ll need to
earn them.