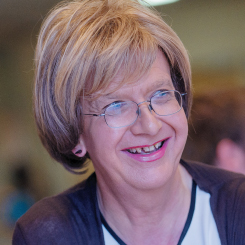 “I did it all back to front, upside-down and mostly part-time,” says Institute for Learning (IfL) president Beatrix Groves, known to friends as Bea, on how she ended up with a degree and a career in teaching.

She came to the profession late, having “absolutely detested” the Catholic single sex secondary school she attended, where discipline ruled. Despite doing well in her O levels, she left as soon she as she could, joining the civil service as a record branch clerk.

While she hated working at the local social security office, updating national insurance records and authorising benefit payments, there was no question of changing path. The DHSS was one of the biggest employers on the Tyneside estate where she lived, and besides — having not enjoyed school — the idea of continuing her education seemed like “a ridiculously stupid idea.”

But being laid off by the civil service in the mid 1980s, and becoming one of “Mrs Thatcher’s great four million,” unemployed, came as a shock and Groves spent the next five years in and out (and it was mostly out) of work. While she was determined not to fall into the trap of “getting up late, swanning around the house and going back to bed again,” the experience was dispiriting. “I always assumed, as I was always told at school, that if I got my O levels, I’d be fine,” she recalls. “But that wasn’t the case at all; no matter how well-qualified you were it didn’t mean you were immune from unemployment.”

At the same time, she was struggling with issues in her personal life. Born male, but having felt, since childhood, that she was meant to be female, Groves had started dressing as a woman in secret, but the pretence was starting to take its toll. “It’s a bit like knowing you are left-handed but someone has told you to be right-handed and you’re scared to use your left hand so you carry on using your right until it gets to the point where it’s driving you crazy,” she says.

Discovering the Workers Educational Association (WEA) — the UK’s largest voluntary-sector provider of adult education — helped enormously. Having been picked on constantly at school for being ‘different,’ Groves learnt that education didn’t necessarily have to be “hostile” and that – much to her surprise – people were actually interested in what she had to stay.

Evening classes in music appreciation led to a teaching qualification at North Tyneside College, and by the middle of the 1990s, Groves had a string of qualifications (including a first class degree in education and philosophy) and a flourishing portfolio career in teaching, which typically meant juggling at least half a dozen contracts at different institutions, at any one time.

Groves set up the Association of Part Time Tutors (APTT) in 1995 and (while admitting to being a “former sceptic”), joined the IfL a decade later – just before membership became compulsory  on the basis that “it was better to be looking out than looking in.”

One of the things that motivated her to stand for its council — and later IfL president — was her decision, in 2008, to ‘come out’ in women’s clothing. “I remember looking at myself in the mirror and thinking to myself, ‘I can’t carry on pretending for the rest of my life.’ I don’t think it was me saying to myself that I had to be a woman from now on, it was more that I couldn’t keep it a secret any more. I couldn’t keep on lying on a constant basis.”

While confronting years of secrecy and telling her family, friends and partner, initially drove her into depression, it has proved a positive move in the long-term. For around a year, she dressed in women’s clothing some of the time (and usually only in informal circumstances), and in 2009, made the decision to “go full-time.”

But going to employers — and there were over a dozen of them, all with varying levels of commitment to their equality and diversity policies — wasn’t easy. “Some of them [her employers] hadn’t got a clue how to deal with it because they just didn’t see it coming, which is alarming to a certain extent,” says Groves. “For some it was a big rigmarole and for some it was, ‘Oh, you’ve got to meet with the chief executive and talk this through.’ Some were better than others but at the end of the day it proved that mostly the bureaucracy worked alright. Mostly.”

Telling students was far easier; having planned to return to work as Bea (Groves was previously known as Bob) after the summer holiday, she found most students were completely unfazed.” I thought when I turned up for the first session I would have no-one in my class and my career would be over,” she recalls. “And it didn’t happen. In fact, I’ve discovered that 99 per cent of adult students I come across are just as nice to me today as they ever were and just take me as they come. They’re concerned with how good I am at teaching them, not what I am wearing…but I’m still astonished every time I come in. Four years on, every time I do, I think ‘I must be doing something right.’”

Her decision to stand as IfL president was driven at least in part, by a desire to show that “trans people could do anything,” she says. And having gone in “with reform in mind,” member voice has been a key priority, particularly around the issue of micro-management. “Everything is standardised and templated and conforms to a policy somewhere along the line which means that the levels of professionalism have shrunk dramatically…but if the IFL wants to make its members become more professional we can only do that if we can do something about micro management – and that is incredibly difficult in a land where Ofsted rules,” she says.

The benefits of uniformity have “strangled the possibility of individual identity and action,” she says – an issue she feels strongly about, both in her personal and professional life. “I’m not dressing like this for amusement. It is an expression of identity…which is about valuing people’s contributions, their own ways of doing things, respecting who they are and looking at the positive aspects of what they can contribute…I have taught in so many different places, met so many different people, and worked with so many different organisations over the years and then there is the whole business with having to struggle with gender identity… my assumption is that people say, ‘She’s been through the mill, she must know what she is talking about.’”

Eagle in the Snow, by Wallace Breem

A train driver – don’t all kids of my generation?

Go comatose in front of the TV