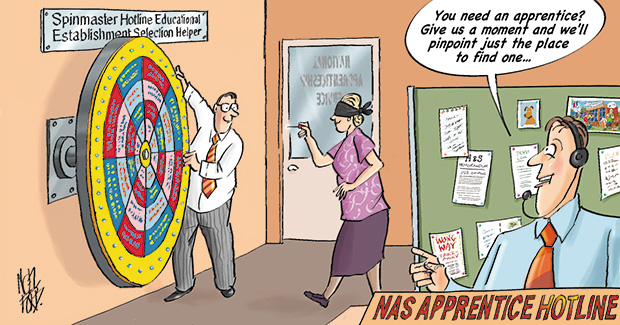 A new code of conduct at the National Apprenticeship Service (NAS) for dealing with queries about providers has sparked concerns that “subjective and third-hand” official advice could be dished out.
The Service Standard sets out how NAS handles calls from employers looking into apprenticeships.

It outlines how NAS aims to put small and medium-sized enterprises (SMEs) in touch with suitable providers.

It was launched along with a nationwide radio advertising campaign promoting apprenticeships and news the government was extending the £1,500 Apprenticeship Grant for Employers of 16 to 24-year-olds (AGE 16-24) to March 2014.

Ofsted ratings are not the favoured criteria of SMEs who usually ask about how a provider has helped another SME in their sector.”

However, the Service Standard has alarmed many in the FE sector by stating that a single “most appropriate college or training provider” would be put forward.

It says NAS would choose which providers to refer on the basis of, among others, employer needs, specialisation, success rates and track record.

Paul Eeles, chief executive at EMFEC (formerly East Midlands Further Education Council) said: “It is important the criteria used are only based on evidence of college and provider performance, rather than subjective views and third-hand understanding of provision.

“It may be beneficial for NAS to publish these criteria for the college and provider community.”

Association of Colleges director of policy Joy Mercer said it would be “monitoring” the NAS summary system and how provides its recommendations “to ensure it gives all colleges an equal opportunity”.

She said: “In some cases where there is a single provider highlighted there may only be one in a very specific field. But where there is a number of providers who fit the bill we would expect the SME to be made aware of all the potential providers.”

And Victor Farlie, executive chair of the London Work Based Learning Alliance, said he wanted to see the selection criteria “strengthened”

He said: “Providers with Ofsted 2 grade for leadership and management should be given first crack at referrals, and secondly no subcontractors.

“The latter point is a hot potato in London as so much of the volume growth — particularly among FE colleges — has been generated this way.

“Basically, we want quality to be the driving influence on referrals and service delivery.”

An AELP (Association of Employment and Learning Providers) spokesperson said: “Naturally, good quality providers will want to be assured that they are getting a fair crack of the whip on the referrals being made.”

A NAS spokesperson said employers would be told about how many providers met its requirements.

“If more than one provider meets their criteria we will mention this, but most often employers ask us for one name,” he said.

“To get to the fewest providers we will ask the employer to tell us what is most important to them, which might be for example where the provider’s physical premises are or what its success rates are.

“No information will be withheld from the employer – we’re facilitating the employer to make an informed choice.”

He added: “Ofsted ratings are not the favoured criteria of SMEs who usually ask about how a provider has helped another SME in their sector.”