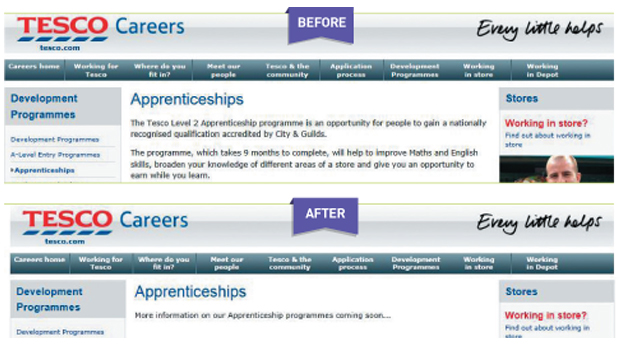 The company, which boasted revenue of more than £64bn last year, had a posting on its website up until Wednesday, January 2, inviting applications for short-term apprenticeships.

FE Week spotted the advert and questioned Tesco about it.

A spokesperson for the supermarket giant said it was simply “out-of-date”.

“We are in the process of refreshing the apprenticeship content on our careers website for 2013, and this has now been removed while the website is updated,” she said.

In April the government said adult apprenticeships needed to be a year or more “unless it involves the recognition or accreditation of prior learning and an appropriate funding reduction”.

The Tesco advert had been for a level 2 apprenticeship programme and was touted as “an opportunity for people to gain a nationally recognised qualification accredited by City & Guilds”.

“The programme, which takes nine months to complete, will help to improve maths and English skills, broaden your knowledge of different areas of a store and give you an opportunity to earn while you learn,” it said.

However, within hours of FE Week’s query, which included advice that apprenticeships had become “of a 12-month minimum duration”, the advert had been pulled. The message on the firm’s apprenticeship page was replaced with: “More information on our apprenticeship programmes coming soon…”

The spokesperson for Tesco, which was allocated £3,851,914 from the Skills Funding Agency’s adult skills budget for 2012/13 and £461,819 for 16-18 apprenticeships, said the supermarket currently offered 12 apprenticeship programmes “all with a minimum duration of 12 months”.

“Many of our programmes, such as bakery and produce, are longer due to their technical nature,” she said.

A spokesperson for the National Apprenticeship Service (NAS) said: “We are confident the Tesco apprenticeship programme meets all aspects of our quality statement.

“We are working with Tesco, as we do with all employers, to encourage them to offer apprenticeships at a higher level, to review their recruitment practices to attract younger apprentices, and to ensure that all apprenticeships are fully compliant with the quality standards.”

FE Week’s discovery of the nine-month apprenticeship advert comes less than a month after the publication found NAS tweeting a link on its vacancy-matching website for nine-month campsite courier apprenticeships.

The adverts were later removed and NAS told Greenbank Services, both the training provider and employer running the campsite apprenticeships, to stop recruiting as the vacancies “did not meet its quality standard”.

Elaine Bader, recruitment and training manager at Greenbank, said that no apprentices had been signed up since March, which was before the rule came into force.