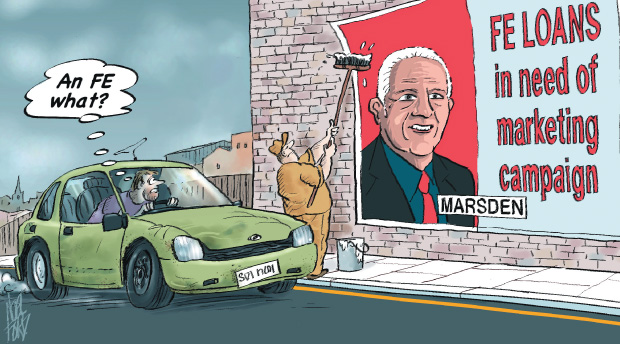 A shadow minister has said that the lack of a “proper” national marketing budget to inform mature students of a new loans system is “potentially disastrous”.

Gordon Marsden,  the FE  shadow minister,  was talking to FE Week after the Department for Business, Innovation and Skills (BIS) announced a £6.5m local communications and marketing budget to publicise 24-plus advanced learning loans.

While many FE courses for the over-24s are currently subsidised by up to 50 per cent, from next autumn the government plans to scrap this financial support and introduce loans to cover the cost of level 3 (A-level equivalent) and level 4 (foundation degree or HND equivalent) courses.

“It is simply unacceptable that there will be no proper marketing budget for loans,” Mr Marsden told FE Week.

“This is the biggest change to FE funding in a generation.  The fact that the government will not be communicating these major changes effectively to learners is deeply worrying, potentially disastrous.”

He pointed to BIS’s own market research that showed only 11 per cent of learners surveyed would have taken their course if FE loans had been in operation.

“This could have serious implications for participation numbers, threatening course viability across countless colleges. Matthew Hancock and his BIS officials need to fight this corner with their Cabinet Office colleagues urgently.”

But a BIS spokesperson told FE Week that “in light” of the “relatively small numbers” of students involved for the first year of the change, the department didn’t feel a national marketing budget was needed.

“We feel it is best to concentrate on local channels, and make information and materials available nationally that can be tailored to meet local need,” said the spokesperson.

“Funding is to help colleges and training organisations prepare for the introduction of loans, including making sure learners have the information they need to make applications from April. This could include a range of local marketing building on the national materials already available.”

VAT is added to the fees of independent providers, which the loans have to cover, adding a 20 per cent mark-up that many believe will negatively impact the numbers  taking up apprenticeships. Under current proposals, learners will only start making repayments when they earn at least £21,000 a year.

The new marketing budget was announced in the Skills Funding Agency’s recent online update: “The agency has received an additional £6.5m to help providers prepare for the delivery of loans for 2013/14. Further information on this will be emailed separately to those providers in scope to receive the fund.”

BIS said the funds would come from money held by the department for the set-up of the loans system.