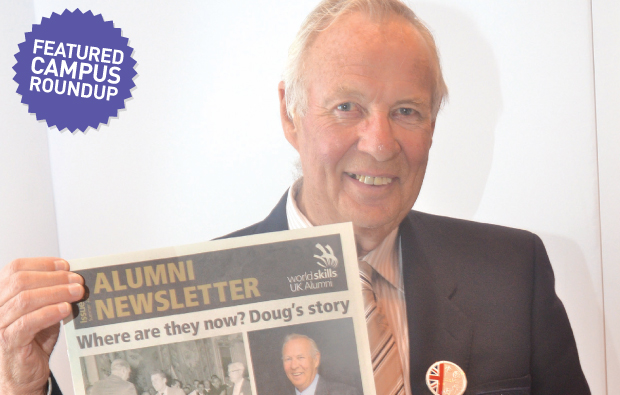 Who would have thought a careers event attracting thousands of young people to Birmingham would have roots leading to a Spanish dictator’s palace?

Doug Hill, now aged 77, was just a teenager when he went to Madrid and met dictator General Franco after winning silver in a woodworking competition. The experience led his father, Frederick, to push British people to compete in WorldSkills shows in Europe before the UK held its own event.

“Of course I didn’t know anything about politics — I was just a carpenter who wanted to prove to my father I was a good cabinet maker,” said Mr Hill.

It was 1953 and a young Mr Hill was working as an apprentice sharpening saws at his father’s factory workshop in Canterbury.

“One day I saw a leaflet in the library for a competition and I told my father I was a skilled worksman. He thought it was a good idea and took me across to the continent.

“It was frightening going to Madrid.  I kept expecting to meet other British competitors but I was the only one.  I couldn’t understand what anyone was saying but I could follow the instructions and drawings. “

The teenager won a silver medal that was presented at Franco’s palace.

“The palace was beautiful and I shook Franco’s hand but, at the time,  I didn’t realise he was a dictator.

“One minute I was planing a piece of wood in Canterbury and the next I was in this huge competition and then a palace — it was awe-inspiring,” he said.

Mr Hill’s father, who was heavily involved with the Scouts movement, thought the competition was a great idea and talked to as many officials as he could in Spain. When he came home he contacted big businesses such as Rolls–Royce and City & Guilds, but many didn’t want to know because of the awkward political situation with Spain.

“My father realised it wasn’t about politics but about the boys and the chance to prove themselves through competition. He got together a team and took them to Europe with his own money to compete.”

He said City & Guilds finally got on board and put on a UK Skills Show in the 1960s.

“I’m very proud of what he created and it’s been fantastic to see all the young people here at this year’s UK skills show. Apprenticeships are very important,” said Mr Hill, who went on to have a successful noticeboard company.

More than 60 “Have a Go” areas allowed visitors to try out a new skill while more than 50 talks were held on different vocational skills.

Mr Hill said he still gave talks to the Chamber of Commerce on the importance of apprenticeships.