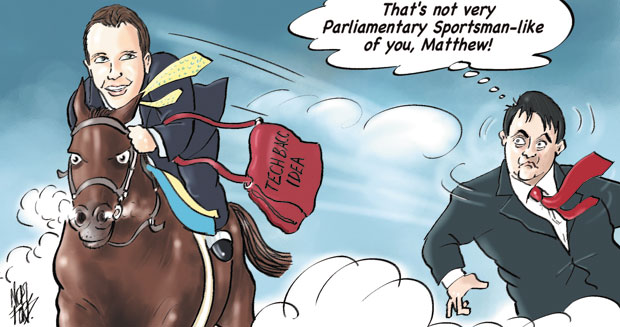 The Shadow Secretary of State for Education, Stephen Twigg, has accused Skills Minister Matthew Hancock of “stealing the idea for a Technical Baccalaureate”.

During a parliamentary exchange Mr Hancock responded saying: “I am absolutely delighted by the positive tone coming from the Opposition . . . the Tech Bac, as suggested by Lord Adonis, a man for whom the Government has huge respect, is one of the things that we will do to ensure higher quality occupational and vocational qualifications and more respect for them. I look forward to consulting widely and will set out more details in due course.”

The Department for Education announced last month that it would consult on the details of a Tech bacc, and publish a list of courses that will qualify next year.

Approved courses are expected to involve a high degree of external assessment rather than tutor marking.

The Association of Colleges (AoC) has called on the government to work with the Labour party on the new qualifications, which are expected to be available from September 2014.

“It would be good if all three major political parties were able to work together to ensure commonality in their proposals,” said Martin Doel, the association’s chief executive.

“In this way we might have some prospect of a proposal that will stand the test of time, help students achieve the best that they can and not go the way of diplomas, NVQs or the other previous ‘new’ ideas in vocational education.”
He added that it was unsurprising employers, parents and students did not understand vocational education when changes were made so regularly to qualifications and systems.

Mr Twigg told FE Week that Coalition support for the idea was “good”, but its plans looked half-hearted.

“While pupils under Labour would have the chance to start a Tech Bacc from 14, and be able to switch between academic and practical courses, the government’s Tech Bacc looks like an afterthought for those who haven’t passed Michael Gove’s much derided EBacc at 16.”

In an interview with FE Week, Mr Hancock was asked about the potential for cross-party consensus.

“My approach will be very consultative. There are a number of different proposals already on the table and I’ll want to consult widely,” he said.

The proposals include plans to present A level and vocational data separately on performance tables from January 2014. Minimum standards for school sixth forms, sixth-form colleges and further education colleges would also be introduced.

“Far too little genuinely occupational education takes place among 16 to 18-year-olds. In the coming weeks we will publish a consultation on how to identify those with the highest value,” he said.

Judith Norrington, group director of policy and research at City & Guilds, told FE Week: ‘We strongly believe vocational achievements should be given prominence alongside academic qualifications – this notion is, in fact, long overdue. We created a technological baccalaureate many years ago with this in mind.

“However, if we are to encourage and engage those people who need it most, especially as the raising the participation age policy comes into force, we must ensure we have the utmost confidence in the way qualifications are considered for performance tables and that the ranking process is entirely fit for purpose.”