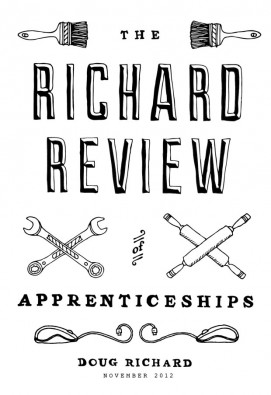 A review of apprenticeships that called for workplace tax breaks has been angrily rejected by the Association of Employment and Learning Providers (AELP).

It said that Doug Richard’s review of apprenticeships “created a hugely damaging picture” from its front cover illustrated with various tools to its “lack of understanding”. It also said that “some of the big things are wrong” and that Richard’s assertion that the report be accepted on an “all-or-nothing” basis was like a “diktat”.

Richard, a former Dragons’ Den investor, bit back on Twitter, dismissing the group’s reaction as “self-interest”.

Graham Hoyle, AELP’s chief executive, said one of Richard’s key recommendations — that “testing and validation process of apprenticeships should be independent and genuinely respected by industry” — particularly upset members.

Angry at me are you. A number of @aelp assertions sound suspiciously like self-interest not rational discourse to me.”

“They feel disappointed, and think the review is naïve and suggests nothing radical or new.”

At the heart of the Richard review was the direction for employers to pay providers directly for apprenticeship training. Tax credits, or other forms of government incentives, should then be dished out to employers.

“We were amazed Doug Richard suggested getting money from the taxman after the training was completed. That would be a direct cash hit on businesses and would reduce SME uptakes of apprenticeships,” he said.

When the review was published, Mr Richard told FE Week his proposals were not “a laundry list” from which the government could pick the elements that it wanted.

But Mr Hoyle said: “We have always said that options should be available to employers, but not a sole, no-choice diktat.

“Our rejection, however, is not based solely on this ultimatum,” he said.

“It starts with the cover, which displays a stereotypical view of traditional basic craft occupations as the depiction of apprenticeships. This is a hugely damaging picture that both ignores the current reality regarding apprenticeships and dangerously misinforms everyone about the future breadth and use of apprenticeships.”

He said the review’s other proposals built upon existing AELP policy such as the group’s belief that apprenticeships must be available for “all-age” employees and that they should not be restricted to level 3 and above.

Doug Richard tweeted in response: “Angry at me are you. A number of @aelp assertions sound suspiciously like self-interest not rational discourse to me.”