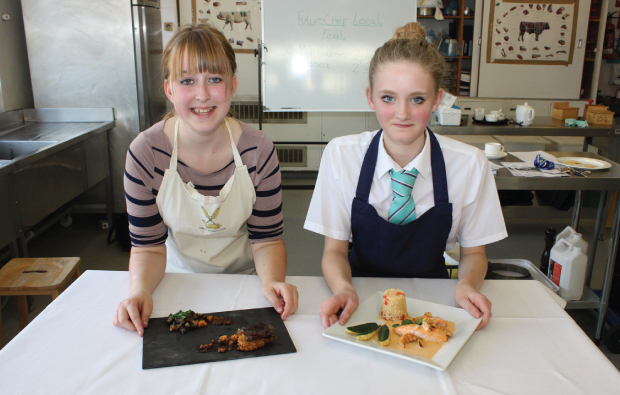 Two aspiring chefs will showcase their cooking skills at the regional final of Springboard’s FutureChef 2013 competition after victory in their local heat at Central Sussex College’s Crawley campus.

Lauren Sinfield, 14, from Lancing, and Rhianna Catt, 15, from Brighton, both wowed judges with their culinary creations. Lauren, a pupil at Sir Robert Woodward Academy, prepared salmon fillet in a white wine sauce with rice and courgettes, followed by a passion fruit soufflé served with raspberry coulis. Meanwhile, Rhianna, from Dorothy Stringer High School, served pigeon breast with a potato rosti, mushrooms and a balsamic jelly, followed by a cherry chocolate fondant and clotted cream.

Head judge Francis Estephane, chef lecturer at the college, said: “Both Lauren and Rhianna put in outstanding performances. Their menus were exceptional.”

“I’m still quite surprised,” said Lauren. “I love cooking at home and would like to be a chef in the future.”

Rhianna said: “For me, cooking is a real passion. The pressure of expectation made things quite tough today and so I was really pleased when the judges announced the result.”