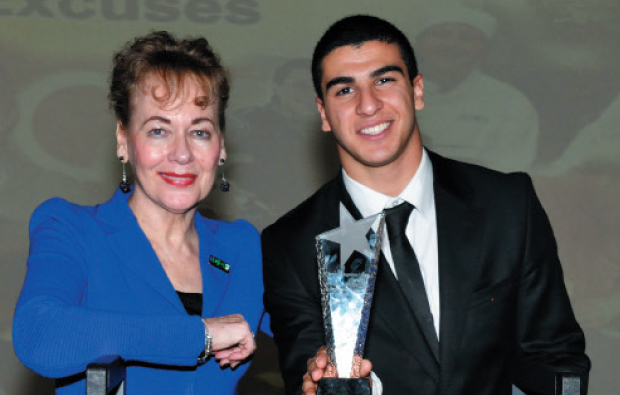 The 19-year-old 100 metres champion picked up two awards at Barking and Dagenham College’s Excellence Awards having received a distinction for his extended diploma in sport.

“It’s really great to be recognised for the time I spent at the college,” said the World Junior Championships gold medal winner. “I had two great years there, I learned so much and made so many good friends. I’m really pleased to get this award and be able to represent the college.”

He scooped student of the year at the awards ceremony held at Broadway Theatre in Barking, as well as a sports and public services industries trophy.

His tutor Errol Parker praised how he kept focus on his studies even while training and competing at the highest international level. “He always met deadlines, never made excuses, came to college when he could, and remained in touch with his tutors throughout his training,” he said.

Claire Young, finalist of reality television programme The Apprentice 2008, spoke at the ceremony. She said: “Tonight has been absolutely brilliant, and I think it’s fantastic that the college is recognising success and recognising that students are working hard and excelling.”