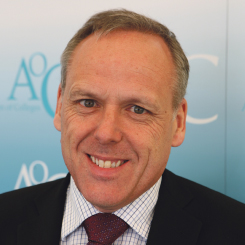 On the day he should have been sitting his maths A level, Martin Doel was in hospital after being hit by a cricket ball. And it wasn’t the first or last time sport got in the way of his studies.

Growing up in Romsey, Hampshire, he spent most of his time playing “football, rugby, cricket, basketball…anything with a ball involved.”

He walked out of his maths ‘A’ level after 15 minutes (having spent most of his time in the sixth form inventing excuses not to go to lessons) and left Totton Grammar School with two ‘A’ levels rather the three he needed to get into Durham University.

After a year out, working as a milkman and stock control clerk, and in bars and restaurants in Switzerland, he went to King Alfred’s College in Winchester, where he studied PE with education.

While he enjoyed the course, and achieved a first class degree, Doel became disillusioned with the idea of being a teacher. Having concluded that the philosophy of PE teaching was about “throwing a ball around and keeping them [the students] quiet for an hour,” by the end of his time at King Alfred’s, he just couldn’t see himself working in a school.

He recalls: “I’d really thought about how I wanted to deliver the subject and I thought there was so much more children could achieve through the medium of physical education that would benefit their wider development…I’m sure things are different now, but I knew I wouldn’t get the space to take control of that at the time.”

He joined the RAF instead, rising quickly through the ranks to senior roles, including working in an underground bunker in Scotland gathering intelligence on Soviet submarines (something he insists was not as glamorous as it sounds), supporting operations in the Balkans and leading an exercise that involved handing back an air base to the Germans, for which he was awarded an OBE in 1998.

By the time my eldest was 11, he had been to five schools, and we really couldn’t carry on like that”

But while he enjoyed having a new job every 18 months, and the experience of living abroad, the downside was disruption to family life, particularly for his two young children. “By the time my eldest was 11, he had been to five schools, and we really couldn’t carry on like that,” he recalls. “We enjoyed it [living abroad] as a family together, but it was just so disruptive to the children’s education…they had to go and stand in the playground and be the new boy every two years.”

The family returned to the UK in 1997 and Doel did a masters degree in War Studies at King’s College, before becoming director of studies there – a post created as a result of a partnership between the RAF and the university.

His next challenge involved merging three RAF bases in Cambridge and Bedfordshire, at one point having 1000 people working directly under him and – for the first time during his 20 years in the RAF – learning to fly a plane.

His decision to leave the air force in 2008, was motivated by the desire to plan the next chapter of his working life and “not just come out at the last moment and take what’s on offer.” (the retirement age for those in the services is generally around 55).

And having been involved in vocational education and training during his time in the RAF, the idea of working in education appealed to him and played to his strengths. So when the opportunity to lead the Association of Colleges came along, he jumped at the chance.

One of the biggest challenges was getting used to the fast pace of change in the sector, he says. “We had LSDA, QIA, CEL and any other number of acronyms you can think of that seemed to just come and go.”

And it wasn’t just the acronyms that took some getting used to. “I soon realised you couldn’t say ‘subordinate’ here [at the AOC] but you could say ‘I want to do something,’” he laughs. “And I had to learn the ‘we’ word, as in ‘we are going to do this.’ I mean, the belief and behaviours are no different…but the language is.

“While the sector continues to deliver quality to students, it has been “under resourced in comparison to other sectors for too long,” says Doel. “How is it that 16 to 18-year-olds in particular can be funded at a rate much lower than 11 to 16-year-olds…and why is that 16 to 24-year-olds are suddenly much cheaper to train or educate than those in universities?”

But it is still too early to measure the impact of the some government austerity measures, such as scrapping of the EMA or the introduction of FE loans, although early indications suggest it the most “vulnerable learners in the most vulnerable sectors” who will be affected, says Doel.

The publication of the government’s New Challenges, New Chances report – and in particular the proposals for a simplified funding system – represent an opportunity for colleges to have greater freedom and respond more closely to the needs of the communities they serve. But after years of being “micromanaged by the Learning and Skills Council,” it is a big change of culture for some colleges,” he says. At the same time, the government is introducing a number of strategies to encourage growth and Doel is concerned that this single stream of money promised to colleges could be compromised by new initiatives like the employer ownership pilot – sending them back to “chasing streams of money,” just as they were before.

The next big challenge for the AOC, in partnership with the Association of Employment and Learning Providers (AELP) is the FE Guild – a new professional body that will set standards and codes of behaviour as well as develop qualifications for the sector – which could be up and running as early as next August. The biggest challenge, says Doel, will be bringing together a “disparate” sector, getting everyone in agreement and behind the initiative.

While he is reticent to be “self-congratulatory” about his successes in the role, he concedes that he was pleased by the AOC’s response to the capital funding fiasco. “It was a major crisis which was bad news for colleges but I think we as an association I think we found our voice again, particularly when it came to engaging with local MPS and in parliament.

“Colleges are hugely effective organisations that serve their communities and deserve a credible voice on their behalf. If we are being listened to in a considered way, that’s something I’m very proud of.”

What’s your favourite book?
A Farewell to Arms by Ernest Hemingway

What did you want to be when you were younger?
A pilot

What do you do to switch off from work?
Watch football since I can’t play any more

If you could invite anyone to a dinner party, living or dead, who would it be?
Alistair Cooke, Katherine Hepburn and Edith Cavell

What would your super power be?
To be able to read people’s minds