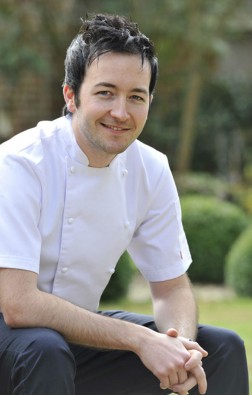 At 26, Will Torrent has achieved more than many chefs could ever dream of. He’s worked with celebrity cook Heston Blumenthal at the Michelin-starred Fat Duck restaurant, won a host of awards, including a WorldSkills medal for his chocolates and desserts, and is the pastry consultant for the supermarket Waitrose.

He’s recently finished his first book, Patisserie at Home, which is out next year, is working on his own brand of products, and will be hitting television screens this December on a cookery show he’s presenting with Jamie Oliver. And it all started with a cake made by his grandmother, Kath.

“My nan always used to make the best chocolate cake,” says Torrent, who is organising the confectionery and pastry competition at this week’s Skills Show.

“Chocolate Victoria sponge, chocolate fudge icing and chocolate buttons on top. We had it for every birthday.

“I remember vividly that moment of not quite reaching the workbench, mixing the cake together, eating the raw mixture off the wooden spoon, and knowing that we’d always have this chocolate cake to look forward to. “If I have chocolate cake now and the flavour’s right I can instantly be transported back to my fifth birthday. That’s the power of food — that it’s exciting. And that hit me from an early age.”

Torrent grew up in Iver, Buckinghamshire, with younger sister Sophie. His mum, Anne, and dad, Peter, both music teachers, encouraged him to cook, but it was a week’s work experience with Blumenthal at 16 that ignited his determination to become a top chef. A teacher at his school knew a waiter at Blumenthal’s restaurant and used the connection to arrange work experience for him.

“It completely changed my life,” he says. “I was absolutely petrified when I walked in as I’d never been in a professional kitchen before. The restaurant had bought me pristine whites and I was absolutely on the edge of my seat. But Heston was still cooking and took me under his wing. At 8am on the Monday he got everyone together and said ‘this is Will. Be nice to him’.”

One of his first jobs was making mustard ice cream. “That childlike experimentation with food really made me go wow, this is cool. The week went on and I absolutely loved it. I began to understand the science behind food,” he says.

On his last day at the restaurant, Blumenthal told him that if he wanted to be the best, he was the only person who would stand in his way “so go on and do it”.

From that moment, Torrent immersed himself in cookery books and programmes, and dedicated himself to experimenting with food and refining techniques.

The British press could tell things were going wrong. They saw me sweating with my workstation in a complete mess”

When he finished his GCSEs he was tempted to go straight to catering college, but decided to stay on at school and complete his A levels in case things didn’t work out.

At 18 he went to the University of West London to study culinary arts management, achieving a first-class degree and specialising in chocolate, desserts and pastry.

“I had this amazing tutor, Yolande Stanley. She was so encouraging and warm, and brilliantly talented,” he says.

“Our first lesson was strawberry tarts. For me, this meant jam tarts, but here was this ex-pastry chef at the Ritz making a beautiful strawberry tart. It was the first time I’d ever been shown proper desserts.

It was also his tutor who suggested that he compete to be part of the UK team for WorldSkills, billed as the biggest international skills competition in the world.

He was selected to be part of Squad UK and after two years’ training, flew to Japan to compete in the pastry and chocolate heat at WorldSkills 2007.

The first two days of the competition went brilliantly he says, but then came day three. “It was one of the worst days ever for me.

“In the extreme awfulness I felt like I was being eaten up from the ground, but when I finished I felt on top of the world”

Something went wrong in the afternoon, which had a domino effect on everything else I was doing,” he recalls.

“It spiralled and I couldn’t get myself out of the mess. The British press could tell things were going wrong. They saw me sweating with my workstation in a complete mess. People were gathering round and the judges were coming to check what was happening.”

“I was making a pistachio chocolate. But it wasn’t setting and I could feel my shoulders coming over the top of me and this massive dark cloud appear. I had a card with symbols in case something went wrong and I pointed to the exclamation mark that meant you were ill. My time stopped and I was rushed off pale and shaking.”

He was taken to the judges’ office where team leader Bruce Robinson tried to calm him down.

As part of the competitors’ mental training they’d been told to imagine they had a monkey on their shoulder telling them that they couldn’t do it — something that they needed to ignore.

“I came bounding out of the room, did the best chocolates I’ve ever done, got my highest mark of the competition, and finished on time to applause,” he says.

Torrent, who is managing confectionery and pastry competitors at the Skills Show, says he often tells young chefs this story.

“It encapsulates so much. In the extreme awfulness I felt like I was being eaten up from the ground, but when I finished I felt on top of the world.”

He won a medallion of excellence and when he came back to England, moved to a Swiss patisserie in Surrey where he stayed for two years.

Three years ago he decided to set up his own consultancy business, Will Torrent, and as well as working for Waitrose, is advising restaurant chain Zizzi’s.

He says that one of the best things WorldSkills gave him was the chance to encourage young people. “It’s such a joy when you see them do something right. Their eyes light up, and it’s ‘yes, I’ve done a good job, I’ve impressed the judges’,” he says.

“I know what their strengths and weaknesses are, how they compete under pressure, what makes them tick. I’m there to say to them you can be the best, you can do what I did. If you don’t know what possibilities are out there, you don’t know what to strive for it. It gives you ambition, determination, drive.”

The Hobbit by JRR Tolkien

Either a footballer for Chelsea, a singer or a chef

Play football with the boys, play the piano or chill out in front of the television

Who, living or dead, would you invite to dinner?

Fly — my childhood hero was Superman