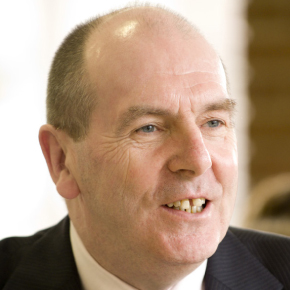 Dick Palmer had a dream shared by many teenage boys: to become a professional footballer. And it was within his reach until his father shared a few “wise words” and told the young Palmer that he “was to complete his education and go to university”.

Palmer, 58, grew up in the small town of Brecon in the Welsh valleys with his mother, a housewife and father, a sign writer. He went to the local boys’ grammar, Porth County.

But while he was a “talented and keen footballer”, he heeded his father and went on to study economics at the University of Wales in the mid-70s, the first of his family to go on to higher education.

He then spent several years travelling, eventually settling in Greece for five years, managing a coach company that arranged excursions across mainland Europe. But it was the years spent travelling, including spells in the Far East and Africa, that helped to shape the man that he has become. “It opened my mind to so much more.”

He now lists the ability to speak Greek as a key skill – in recent years he’s even offered to teach colleagues as part of the City College Norwich’s skills sharing programme.

Dame Ruth Silver taught me a tremendous amount. She was inspirational.”

He never intended to teach, but says that he tried it 1985, loved it and has never looked back. “I found myself teaching two classes. The first was teaching IT to teachers; that was terribly tough. But I found it rewarding. The second was to students who had learning and mobility difficulties. Those two experiences ignited a passion that led to me pursuing teaching as a career.”

In the next 15 years, Palmer taught in a variety of institutions in Leeds, Selby and South London. In 2000, he moved to the Department of Education and Skills where he spent 18 months as their head of e-learning. His first senior management role in a college was at Lewisham College where he was appointed deputy principal in September 2001. “My time under the leadership of Dame Ruth Silver taught me a tremendous amount about becoming a leader and prepared me for a principalship. She was inspirational. We were doing lots of seriously innovative stuff at the time. I knew then that I wanted the opportunity to provide greater opportunities to many more people.”

It did not take many interviews for Palmer to secure a principalship. “City College Norwich was the first I applied for, and I got it. Being offered the role in 2003 was a very proud moment.

“You hear lots of tales about Norfolk and Norwich; to the outside observer it could feel like a world away from the hustle and bustle of London. True, it is very different to London. But this is my home and my children’s home and I love it. It is a beautiful county that is rich in history and culture. I have no regrets moving here. Norfolk will now always be my home.”

When I look back now and see what we have achieved as a college, I made the right decision in not quitting.”

While Palmer has certainly fallen in love with Norfolk, life as a principal has not always been so rosy. “There was a period where I was ready to walk away and leave it all behind,” he says now. All new principals start with new ideas and proposals for change – but for Palmer it was not about making his mark, it was about “building a college that truly served its community”.

“When I joined I was startled by some of the processes that were in place; the lack of engagement with the community and not having a complete curriculum offer. It was heavy with level 3 courses, but lacked a provision for levels 1, 2 and entry programmes. I wanted to make a variety of changes to the structure of the organisation and its offer.”

Palmer paints a picture of a figure lonely at the top during those early days. “Change was going to be far more challenging than I had first thought. I had come to a new college, in a new city. It felt as if there was no one to support me. All leaders require a team around them; I had not yet built that team. The task was one that had to be undertaken on my own.

“When I look back now and see what we have achieved as a college, I made the right decision in not quitting. In fact my biggest regret is that I did not come to Norwich earlier.”

Palmer speaks about some of the more daring changes that he has made. “Students are at the centre of what we do. I was passionate that they should play a central role at the top table of my organisation. We increased our number of student governors to three and included the union president on my senior management team. Although daring in the sense that I was not entirely sure what contribution they would make, each president has made a significant impact and has ensured that the college responded to students’ opinion efficiently and effectively.

“It made me realise that the risk was worth it. As a college we were receptive and agile, thanks to listening and acting upon the students’ voice.”

Palmer received national recognition for his work and commitment to the students’ voice when in 2009 he was awarded the LSIS principal of the year award.

He beams as he tells of his pride in the college that he has transformed. “The college has gone from strength to strength. We have a great team with great students who are truly at the centre. We serve our community and are honoured to be able to make such a contribution to Norfolk.

“I am passionate about the role colleges can and must play in their community; they are a central part. We’ve worked tirelessly building and enhancing relationships with local employers, civic leaders, parents and community groups. It has paid off.”

And his proudest moment? “The day that I travelled to London, to collect the Queen’s Anniversary Award for Higher and Further Education.

“I went with my governing body chairman and around ten students who were part of Rug Room, our centre for students who have autistic spectrum disorder. I was elated by the recognition from the Queen for the college’s work with students with ASD and to see those students chatting with the Duke of Edinburgh was just great. That day is unforgettable.”

Palmer was recently appointed CEO of the Transforming Education in Norfolk (TEN) Group, a federation of City College Norwich, two academies, a shared services company and a university technical college (UTC) due to open in September 2014, and remains chief executive of City College Norwich. Palmer is also one of five founding members of the pioneering Gazelle group, a group of principals supporting further integration and entrepreneurial skills within the curriculum.

“The next few years pose many challenges and opportunities.

“It’s going to be busy, but I’m ready for the challenge.”