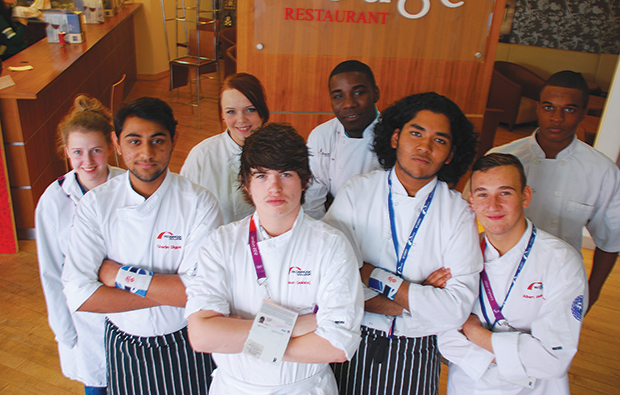 Top chefs at the Olympics were so impressed by the culinary skills of a hearing-impaired learner that they’ve offered him a job.

Hospitality and catering student Ryan Easton, 19, cooked for more than 13,000 athletes during a 10-week placement at the Olympic Park athletes restaurant, serving some of its biggest stars, including Usain Bolt and Mo Farah.

He was one of 52 students from Redbridge College in Sussex given the opportunity to work as a full-time paid professional chef at the Games.

“It was very hard work each day but if there were any problems we all helped each other. The people I was working with were all incredibly nice,” said Ryan, who worked as a commis chef.

“I learnt new skills and techniques I hadn’t seen before. The thing I will remember most is the respect I received and knowledge I gained from the experienced chefs who acted as my mentors.”

Vilson Delishaj, 17, was also feeling the heat at the Olympic Park. “This was my first ever experience of paid work in the industry,” he said.

“It was great to be able to meet and learn from experienced chefs from all over the world – to get paid as well made it even better.

“Being in the athletes’ village was just amazing. Everyone was so friendly and there was a great working atmosphere.”