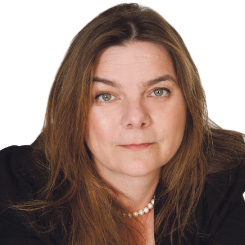 Arguing with teachers about the Falklands War, a plucky and inquisitive teenage Sally Hunt makes her way to Greenham Common women’s peace camp to campaign for nuclear disarmament.

“I think things have to be argued and I think they have to be justified – I don’t think there are any givens in this world,” she reflects.

Hunt is at the University and College Union’s headquarters, tucked away behind the hustle and bustle that is Camden High Street, North London, where she speaks about her upbringing in Germany.

Her father taught in a British forces school, before the family moved to Chippenham, in Wiltshire, when she was seven years old.

Her mother, also a teacher, brought her up with a firm belief in the importance of social justice.

“She gave me a very strong sense of what women ought to achieve and how they ought to aspire to be a part of life, and actually be a full part of life – not someone who just sits on the sidelines and watches,” she says.

“I remember seeing him having to pop pills while he was speaking because his hands were shaking,” she says.

Campaigners like Baker had a huge impact, admits Hunt.

Her interest in political activism flourished when she went to the University of Sussex to study international relations.

It was a university renowned for its radicalism and she was “hit by an absolute melee of interests and persuasions”.

The debates, protests and fundraising that engulfed her life taught her as much, if not more, than the degree itself.

“It’s the bit I worry most about students now,” she says.

“It’s so hard with the fee regimes for students to actually have time to participate in all those extracurricular activities.

What education does is make you learn to debate. It makes you learn the world is a very big place”

“I think it’s really important that you’re given that space – to be quite stupid or too black and white in your opinions, or too determined in what you think is the right thing.

Hunt was at university during the 1980s when miners were going on strike across the country and she became heavily involved in trying to defend the Kent mining community.

Unbeknown to her, her grandfather had been a Kent miner.

“It was a very strange full circle. That was where my family had been and that’s where I ended up,” she says.

More than 20 years later her time in Kent remains vivid.

“They had no money — no sustenance. They were on strike for a year and that’s not something I imagine many people will have to confront in their lives,” she says.

“I remember spending a weekend with one family and them giving us steak. There wasn’t a hope in hell they had the money to do that, but it was really important to them because we were their guests.”

Since the mine closures she has driven back through the area.

Nevertheless, she speaks passionately about helping to defend this “extraordinary” community.

So when she graduated, having been vice-president of the students’ union, she had no doubt she wanted to work within the trade union movement.

Her first job was senior research officer at a union for staff at Halifax Building Society and she later represented employees at Nationwide.

And it was her subsequent position at the Association of University Teachers (AUT), which she joined in 2002, that led her to the UCU.

The move to the UCU followed the merger in 2006 of the AUT and National Association of Teachers in Further and Higher Education.

When members cast their votes in March this year, however, she won with a landslide victory — defeating sole opponent Mark Campbell by a margin of 6,835 votes, gaining 73 per cent of the ballots cast.

“I felt absolutely blown away by that,” she says.

But whereas this was one particularly memorable event, it’s the people she’s met along her union career path that have proved an unending source of inspiration.

“It’s where it’s people — it’s not about going in and seeing a minister,” she says.

“It’s not about sitting down and talking to a national employer — it’s where you meet the people who have the courtesy to pay £100 each to a collective pot to enable me to do my job.

“I will never cease to be amazed that I get to do this.”

As she talks about the information and confidence people entrust her with, the suggestion her role in people’s lives is a responsibility meets with an unexpected frown and shake of the head.

“It’s not a responsibility. It’s an absolute honour,” she points out.

“It is something you are very lucky to have if you are part of the trade union movement.

“But actually I am in the best group of people you could possible ask for, because it’s about people making a positive contribution to each other. “That’s something that very few people get to do.”

Impossible question. At the moment The Killer Angels by Michael Shaara

Helping Arsenal win the triple would be good, or water divination — preferably both