The government will pay private companies, including 24 FE colleges, to help 16 and 17 year-olds back into a job or education, it was announced today.

The initiative is part of the Youth Contract, unveiled by Nick Clegg in February and worth up to £126 million.

Charities and businesses will be paid up to £2,200 for every young person helped, with the full amount being awarded only if they are still in full-time education, training, or work six months later.

It is hoped a flexible ‘payment by results’ system will allow firms to drastically reduce the number of young people not in education, employment or training (NEET).

The programme will operate over the next three years and help at least 55,000 NEETS with no GCSEs graded A* to C.

Nick Clegg said the scheme would help young people “who have fallen through the net” to get back on track.

“We can’t treat them like round pegs being forced into square holes,” he said.

“If you’re young and have got to the point where you feel on the scrapheap, you need extra help to succeed in life.”

The Deputy Prime Minister said the ‘payment by results’ approach would also allow businesses to do “whatever it takes” to help young people back into education or work.

“In exchange for this freedom, all we ask is that they get results,”  he said.

“It’s a win-win for government, young people and the organisations involved.”

The government also announced today the companies which have been approved to take part in the scheme.

Among the preferred bidders are 24 FE colleges: 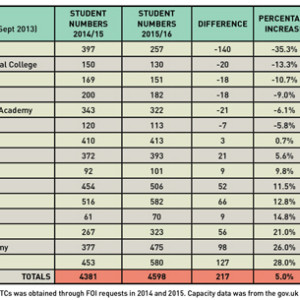