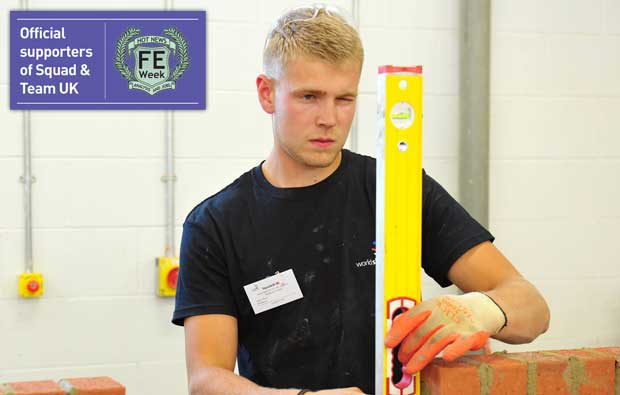 The National Apprenticeship Service (NAS) has today announced the young competitors that have won a place in Squad UK for WorldSkills Leipzig 2013 – the skills Olympics.

WorldSkills is the biggest international skills competition in the world. Held every two years in one of its 61 member countries or regions, the competition sees around 1,000 young people aged 18 to 23 compete for medals in more than 40 different skills – from mobile robotics, to landscape gardening.

One of the lucky competitors picked for Squad UK is Ashley Terron (see picture above) – a former student of Warrington College that now works for Peter Terron Brickwork Contracting Ltd. The 20-year-old bricklayer told FE Week that in his last year of school one of his teachers strongly discouraged him from going into bricklaying, telling him that he should only consider construction if he failed his A-Levels.

“I’ve used that to spur me on,” says Ashley. “I wanted to prove him wrong.” He believes that trades are undervalued and praises WorldSkills for challenging this.

“Without trades and without the skills that are in the competition the world wouldn’t go round,” he says. Ben Weardon, a health care assistant at Coote Lane Residential Home who studies at Preston College, told FE Week that gaining a place in Squad UK has given him the belief that his can “do anything”. The 19-year-old, who is competing in the health and social care category, has always wanted to open his own business and since being selected he has secured the funding to do this.

By competing in international competitions, the UK is able to showcase the high levels of performance that can be achieved by individuals and organisations”

The members of Squad UK were chosen from among the UK’s most talented apprentices, employees and learners after they competed in tough three-day selection events. They will spend the next year preparing to take on the very best from across the world, undergoing a specialised training programme supported by a dedicated training manager for each skill.

Squad UK competitors will compete for a place in Team UK at further selection events in March 2013.  Team UK will then carry on training intensively before heading to WorldSkills Leipzig in July 2013.

Jaine Bolton, director at the NAS and UK official delegate to WorldSkills International, said: “I offer my warm support and congratulations to every young person that has earned a place in Squad UK.

“By competing in international competitions, the UK is able to showcase the high levels of performance that can be achieved by individuals and organisations through high quality further education, skills training and apprenticeships. This provides the inspiration for young people and adults to be ambitious in their pursuit of skills to the highest level.”

FE Week is the official supporters of Squad and Team UK and will be following their progress from the selection competition (read our report here) all the way to Leipzig and beyond.