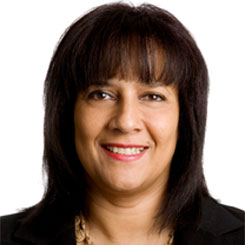 Denise Brown-Sackey describes further education as being in a constant state of flux and change. It’s why, as a natural survivor and “pretty fearless” leader, she’s the ideal principal for Newham College.

From the age of three, Denise grew up in local authority care. The experience gave her strength and an adaptability that is still with her to this day.

“I would see myself as being a care thriver,” she says.

“It was possibly traumatic at the time, but I built a resilience that enabled me to turn it into an experience.”

Denise and her sister were the “core” of a children’s home for 15 years. “You don’t become attached too easily,” she says.

“You develop skills to communicate with people, to get on with people and to do it in a way that you don’t become overly attached.

“I think that’s an important survival technique, particularly in a career, because if you become attached to a particular way of doing something or a particular idea, and it doesn’t work out, it can crush you.”

When I ask if she was academic at school, Denise says it was difficult to know. Her upbringing meant she had little emotional support or way of comparing her achievements.

“Expectations were zero,” she says.

“You go to school because you have to. There wasn’t any real expectation of achievement and by and large, lived up to that.”

However, Denise was bright and very able. She came out with good O-levels, far higher than the national average for children in care. It led to an ordinary national diploma in catering management at Tameside College of Technology, later opening up a route into higher education at Leeds Polytechnic.

But Denise says she often struggled to gain recognition for her academic ability. At the time social workers were keen to enrol care leavers on vocational courses because they thought it would improve their chances of finding a job.

“I applied to do dietetics at university and then applied to do a higher vocational qualification in hotel and catering management,” she explains.

Denise recalls what it was like to move to Leeds, but I’m surprised by her response. Living in a children’s home, she says with a chuckle, wasn’t too dissimilar to student halls of residence.

“I seemed to have gone from a small children’s home to a big children’s home! There were corridors of separate doors with people who lived in them and whom I interacted with, but they weren’t family. In that sense, it wasn’t hugely different.”

Although Denise rarely felt challenged at university, it was an “absolutely essential” part of her life. Every young person, she says, should experience being away from home before they’re fully independent.

Within the first six months of leaving university she had moved to London and secured her first management job in contract catering. Alongside her job she took a postgraduate diploma in management studies at Kingston University, hoping – she says with a snigger – that she would become a “international fantastic super-duper head-hunted hotel entrepreneur manager”.

However, Denise wasn’t satisfied with her line of work. It was only after she stumbled across a recruitment poster for volunteer teachers that she finally found her true calling.

“I hadn’t really valued education. I thought school was great, I thought it was great fun, and that’s because I never really struggled to get the basics. So to discover there were adults older than me who couldn’t read was amazing.”

Denise recalls, smiling from ear to ear, how elderly women from the Caribbean would attend with a Bible, incredibly keen to learn. Unfortunately figuring out what they had learned was quite tough, because they had memorised almost every psalm on every page.

“They would be following it with their finger and reading it off par, so you would slow down and say ‘okay, what does this word say?’ They would reply ‘oh me no know, let me carry on reading’, and before you knew it they were back into their flow.”

Keen to leave her old job behind, Denise began teaching vocational courses and adult literacy courses part-time. After a couple of years she took a job as a grade one lecturer, with an additional role as head of adult education centre.

But that wasn’t enough. Denise enrolled on a part-time Master’s degree at Bournemouth University, and became pregnant with her first child in the second year. Frequently travelling back and forth by train, it was a constant balancing act during her mid-twenties.

“I loved it and I suppose my partner at the time was the same. We were both high energy people. I look back now, and where I am in my life now, and realise that if you’re not going to do it at 25 you’re never going to do it. You’re not going to have that level of energy, that drive, that ability to have 10 plates in the air and keep them all spinning. Because if you do stop and think about it, you wouldn’t do it.”

During her Master’s degree Denise found a new job as a grade 2 lecturer at Newham College. Appointed as a multi-ethnic education adviser by Dame Ruth Silver, she was tasked with increasing and broadening participation in the college.

“The challenge was to break down internal barriers which were stopping ethnic minority students being recruited and external
barriers which stopped them applying to the college,” she says.

“Twenty-five years on, the balance has completely reversed. Now it is absolutely reflective of the local community.”

Denise was frequently promoted at the college, never staying in the same position for more than 18 months. While she says she had “a huge attachment” to the organisation, it didn’t stop her moving to Havering College as vice principal 14 years later.

“It was the lack of opportunity at the next level that took me away, I suppose that indicates I was always ambitious, because I wasn’t ready or prepared to sit as a director – I wanted to go and be a vice principal and the opportunity wasn’t at Newham College” she says.

Working at Havering College for two years gave Denise a fresh batch of confidence. It was the sudden realisation that she could change the college not because people liked her – or had worked with her for more than a decade – but because she was very good at her job.

Two years later Denise moved back to Newham College as deputy principal. The experience was like “going home”, but with one key difference: colleagues could clearly see how far she had grown.

“It was instant. I think they had respect for what I had done at Havering but also respect because they had felt the difference when I wasn’t there.”
Denise became principal in 2010. She says the sense of responsibility, more than anything else, was the greatest shock.

“If you invert a pyramid and stand it on its head, that’s what it feels like. You’re at the bottom, holding up this huge organisation and, if it can, everything will be delegated to you because people want your input into everything, your attention. That’s great, in fact it’s really fantastic, but you’re only one person and they are many!”

If you invert a pyramid and stand it on its head, that’s what it feels like

Clearly she doesn’t mind. Denise is passionate about the future and what Newham College continues to achieve.

“We will find a course that’s right for you. We’re not looking at your CV; we’re looking at where you want to go and how we can help you get there. That’s what we’re about.”