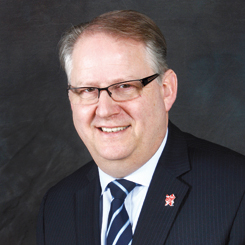 “You can turn on a sixpence and you can respond very quickly,” Nigel says.

“To pull the team together is just a phone call away, rather than having to plan around lots and lots of diaries. “I love that cut and thrust, I love that sort of business acumen.”

Despite its small size, Nigel Duncan is incredibly proud of Fareham College. He was appointed principal and chief executive of the college in March this year, following 18 months as an acting principal for Carl Groves, his predecessor.

Although Nigel’s career in FE started in his early twenties, and has taken him through Solihull, Lowestoft and West Herts College, it’s clear he’s only just getting started. Growing up in Solihull – an middle-class town just outside of Birmingham – Nigel says he was exposed to “a very traditional education system”. “I did OK at school, and thoroughly enjoyed it!” Nigel has a strong sense of humour, and believes it was nurtured at school through his passion for drama.

“What really developed me and gave me the confidence to work in management – and perhaps FE generally, was an experience of performing arts,” he says. “Confidence gives you the ability to perform in front of any audience, large or small. If you can express yourself and you can hold an audience, then you will be able to get your message across. If you find that quite intimidating though, it can undermine what you’re trying to say.”

After leaving school it was food, and the catering industry in particular, which gave Nigel a route into the world of work. At just eighteen years of age he had already moved to London and started working as a chef in The Savoy. He says it was the making of him. “It just gives you that independence. I was staying in Stockwell around the time of the Brixton riots, so it was a real eye-opener at times. However I loved it because the people I worked with were fantastic, and I learned an awful lot of skills.” He then moved to the exclusive Lygon Arms in Broadway in the Cotswolds, where he rose up the ranks.

His ability as a chef then gave Nigel an opening in the further education sector, helping a friend cover another lecturer on a part-time basis. Despite having no formal teacher training, and a significant drop in pay, he was instantly hooked. Nigel then moved to Solihull College as a full-time L1 lecturer, where he says he needed to be “a bit of a show-off at times.” “There’s a little bit of a risk doing it, but I think that’s part of the act you have to go through in terms of making sure you’re confident all the time.”

Simply being a lecturer wasn’t enough though. Nigel would go back to the industry every summer, catering for golf tournaments, Goodwood and other high-profile events. It was a crucial source of income, but also a way of engaging in regular CPD. After a number of years at Solihull culminating in being the technical and vocational education initiative (TVEI) coordinator – as well as an L2 lecturer – Nigel moved to Lowestoft College as a senior lecturer.

“It gave me a whole gambit of new experiences,” he says. “I was not only senior lecturer for hospitality and catering, but also deputy head of Department for Health and Service industries.
“So I had care and health studies to manage, which were brand new experiences for me.” Nigel soon found himself on a career ladder which would last an incredible 14 years at Lowestoft College. In that time he was promoted to head of centre, head of department and director of faculty. It was at this time that he realised he had a profound interest in the management and strategy of FE colleges.

“What I learnt was a complete understanding of further education,” he says. “I was hungry to find out how does this college business work? How is curriculum determined? What makes a college a good college? How does the college make money? How does it operate? How is it managed and how is it funded?” While working at Lowestoft College Nigel completed an MBA in educational management at the University of Leicester. But by this point both his children had left school, leaving home for either University or the armed services. It was the perfect opportunity to make another move in the sector.

“Lowestoft was brilliant, and I still consider my experience there as the most important in my FE career, but my interest in management meant that I needed to move to experience other colleges,” he says. “I thought I had better move to experience a larger college.” Working at West Herts College couldn’t have been a better fit. As director of learning for service industries, Nigel experienced the college as it tried to reinvent itself as a “serious contender” in the FE sector. It earned him a promotion to director of curriculum for the entire college.

“It was going through some quite radical changes,” he recalls. “But on the back of that I felt I was finally in senior management. “I had experienced all the HR issues which you go through, all the resourcing, planning and strategic issues – it was a very steep leaning curve, but extremely rewarding.” Looking ahead Nigel realised to become a vice-principal he would need to create his own opportunities.

“As you go up the ladder the opportunities become fewer and fewer, because the number of jobs at that level are fewer,” he says. “You can’t just wait around and hope someone will knock on your door and say how do you fancy being our principal? It’s not going to happen, so you have to create your own.”

Not afraid to travel around the country, Nigel then took a job at Fareham College. The institution was coming out of recovery and needed to address some significant quality issues. But it was the challenge, coupled with the intimacy of a smaller organisation that kept him hooked for the next four and a half years.

It was then, unexpectedly in September 2010, that the former principal of Fareham College became ill. After just a few weeks the corporation asked Nigel to step into the role as acting principal.
“I don’t think you ever realise what it’s like to be a principal until you actually become one,” he says. “You’re everything from accounting officer to chief executive and head of the organisation.”

Nigel ran the college as Acting Principal for 18 months at a time when funding cuts were hitting the sector hard. However, he says he always had the support of his staff and wouldn’t have successfully confronted the funding issues without their commitment. “Even during times which are pretty uncomfortable and pretty tricky when you’re making adjustments or changes to the organisation, I think as long as you tell staff why you have to do it, and what the rationale is behind it, nine times out of ten staff will say they understand why it is happening.”

During this period Nigel was able to visit the Principal on a weekly basis, asking him for advice and updating him on the college’s progress. “I always had very good relationship with the principal, so I talked it through with him and got his endorsements for what I was trying to do,” he said. The Principal did return to the college, but took early retirement a few months later on the grounds of ill health. The post was then advertised nationally, and Nigel was appointed earlier this year.

“It’s a certainly an empowering job,” he says. “You can make decisions that liberate people’s skills and have a real impact on the organisation and its students. “Being a principal is fantastic in that sense.” Nigel says he is now focused on making sure Fareham College “continues to moves forward.”

“We have to be very careful about where we spend our money, and what we use it for,” he says. “Whilst we live in uncertain times and nothing can be guaranteed, we must ensure that we remain focused, and that our efforts and our investments, always contribute to the performance and success of the college and its students.”