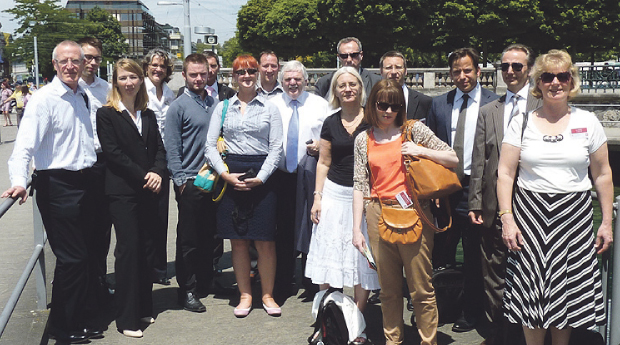 On June 18 Shane Chowen took a four-day break from his full-time job as Policy Officer for IfL and travelled to Switzerland for a ‘study and media trip’, reporting exclusively for FE Week

What’s clear from day one is that you can’t help but be impressed with the Swiss set-up for apprenticeships. In fact, as I write this I’m actually slightly jealous and not for the reasons you might think. Today I’ve learned about the infrastructure that enables the apprenticeship system to work effectively.

All of this I’m looking forward to going into in more detail on my return, but it’s not the impressive participation figures, both of learners and of employers, that’s got me thinking.

It’s also not the smooth and apparently bias-free progression routes in to higher and professional education or even the country’s below-OECD-average youth unemployment rate.

The most staggering difference between the UK and Swiss apprenticeship system that I’ve come across is how embedded vocational education and training is in Swiss society.

Forgetting for a moment the technicalities and thinking specifically about policy and culture, today’s Swiss vocational education and training system is the result of more than 100 years of development and it now seems an almost effortless part of life.

The country’s political system is such that a new administration cannot simply overhaul and reform every four years. The system is not littered with for-profit organisations and layer upon layer of administration.

Power and funding is not centralised but the qualifications framework is. Even one of the country’s seven Ministers (the majority of whom are women for the first time, by the way) is a former apprentice.

I want to save most of the detail for my full FE Week write-up, next week, but I want to leave you with this. At the Federal Office for Professional Education and Training, the Swiss equivalent of BIS, I saw the jaws of 10 UK FE representatives hit the floor. Four years ago, demand for apprenticeships exceeded supply – there wasn’t enough to go around. Sound familiar?

In 2011 though, there were 90,000 apprentices for 93,500 available jobs. In such a short space of time, the Swiss vocational education and training system had clicked in to gear and delivered for its young people.

Just hearing the words, “plenty of jobs to go around” sounded odd to me, like seeing people smoking indoors.

One of the major differences between the UK and Swiss system is the power that cantons – local authorities – have over their local economy, very much including the vocational, higher and professional education and training landscape.

Arriving in Switzerland was a shock for a couple of reasons. Firstly on landing, when the pilot announced that the ground temperature in Zurich was a toasty 30degC, my thoughts turned immediately to what is easily the most unprepared packed suitcase possible.

The second, and more serious, concern was this. This trip has been funded entirely through the Swiss Government, their foreign office to be precise. “Nation branding” is a big deal for Switzerland and flying over 10 of us can’t have been cheap. My job was to try to do the Swiss tax payer justice.

My colleagues on the trip come from quite an arrray of backgrounds and specialities, ranging from a social entrepreneur, a couple of UKCES commissioners, a sector skills council representative, a journalist, an SME expert and none other than the chief executive of the National Apprenticeship Service. Anyone would think this was the new series of Skins.

First we headed to the Swiss Federal Office for Professional Education and Technology, for an overview of the Swiss Skills system.

What I was really looking forward to was our visit to the Swiss Co-ordination Centre for Research in Education where we found out about cost / benefit for companies in taking on apprentices – figures used with gusto by UK Ministers.

With such a higher proportion of young people taking on apprenticeships here, I’d imagine economic benefits for employers are probably better articulated.

A huge difference between our political system and that of Switzerland is the power devolved to local government.

Switzerland has 26 cantons that have their own tax raising powers and control over their education and training systems.

All teachers, including those who teach apprentices the ‘general education’ element of the framework, are employees of the canton. Universities are owned and controlled by cantons.

It is the cantons who collect and then distribute local labour market information that informs the skills needs for course content and informs the careers advice service on the availability of jobs.

This local kind of supervision means that schools in Switzerland, supported by the canton, start a comprehensive information advice and guidance programme from the age of 14.

We visited the canton of Solothurn’s careers guidance centre where an expert team co-ordinate a huge amount of resources and activities for 14-16 year olds at school but also deliver professional guidance counselling to anyone of any age, free on site. That’s what I call an all-age careers service.

At 14, my careers guidance was half an hour which – after much soul searching – told me to go to university to study town planning.

If I had been Swiss, I’d have experienced weekly, timetabled careers guidance sessions that would have involved workshops and visits with local companies, as well as taking part in discussions on my own strengths and interests and on the local labour market.

You read that right, at 14 I’d have been looking at labour market information at the point of forming a view of what it was I might want to do.

This would have lasted right the way until I finished compulsory education at 16, covering everything from interview techniques, social skills and applying for apprenticeships. Companies advertise apprenticeship vacancies way in advance and all apprenticeships, unlike here in the UK, start at the same time in late August.

In Solothurn, teachers are gradually taking professional qualifications in delivering these sessions. I suppose there are advantages and disadvantages here; on the one hand an ‘apprenticeship year’ would allow employers to plan better, you’d know when your third or fourth year was set to graduate and know exactly when to begin the recruitment process to replace them.

On the other hand though, it could disadvantage small businesses where there is only a finite window of opportunity that makes it financially viable to take on an apprentice.

I saw a lot to bring home at this meeting; local authority wide online advertisement of apprenticeship vacancies, timetabled careers guidance sessions, training for teachers delivering IAG and bringing apprenticeships in line with the academic calendar.

Read the next issue of FE Week for more on my study trip.