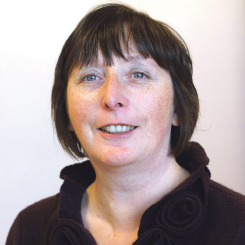 “I did it for all the wrong reasons,” says Sara Mogel of her decision to go into education.

After a degree in economic and social history at Kent University, she did a teacher training course in the mid 1970s, purely because it came with a full grant, and having just married an American who didn’t qualify for a work permit at the time, she needed a source of income.

As it happened, she fell in love with teaching the moment she set foot in the classroom. “I just remember thinking that you could actually use your brain power to spark something in somebody else,” says Mogel, now principal of West Cheshire College.

Her training placements – at an independent boys school and a girls’ secondary modern in Kent – could not have been more different, she says. “The career aspiration at the girls’ school was to be a gooseberry shaver at the Smedley’s plant because they got a higher rate of pay than in the canning factory. Then I went to the private boys’ school where the staff had high tea in the staff room at 4pm. It was like a different world.”

Born in Milford on Sea in Hampshire, Mogel says she had a “rather peripatetic childhood”, moving house and school numerous times, which left her with the feeling of “not having roots anywhere”. The death of her father from cancer, when she was 14, had a major impact on her life, emotionally and financially. Her parents had managed a golf club together, with accommodation on site, but after her father’s death, her mother found herself out of a job and a home. “People talk to me about students who can’t afford things…I know that inside out and upside down,” she says. “My mother did her best to make sure that I did get what she thought was the same as everybody else, but I was very aware how difficult that was.”

Mogel spent the first ten years of her teaching career working in Kent schools and, after a break to have children in the late 1980s, started teaching part-time in further and adult education, where she began to get involved in the TVEI (Technical and Vocational Education Initiative).

In the early 1990s, she moved to Cheshire County Council, where she took on an advisory role, specialising in curriculum development and TVEI for 14 to 19-year-olds. In 1993, she became an inspector for the Further Education Funding Council (FEFC), which she describes as “the best management training in FE you could possibly get”.

It was then that she started to consider the idea of becoming a college leader, and when the role of deputy principal came up at West Cheshire in 2000, she decided to go for it. While she knew the college had “financial, quality and property issues”, she relished the idea of a challenge. But a day before she was due to start, she received a phone call that changed everything.

“The chair and vice-chair of governors invited me to a hotel in Chester for a cup of coffee and sat me down and told me that the principal and the college had parted company. And therefore I was to go in on Monday and to start work as acting principal.”

When Mogel went in the following day, it was clear what had gone wrong: “I went into the principal’s office and discovered a desk piled high – literally, physically piled high – with things that had not been dealt with, and I asked to see the director of finance, because the college was about to go bankrupt. I spent most of that day dealing with emergencies because somebody had to deal with them and nobody else was there.”

Mogel soon found herself with a long list of emergencies to deal with – the most pressing being the fact that the college didn’t have a strategic plan.

I went into the principal’s office and discovered a desk piled high – literally, physically piled high – with things that had not been dealt with”

There was also a botched building programme to contend with; a site had recently being sold off to raise funds for a new building, and although the college had planning permission, no progress had been made. “This was December…and there were students and staff with nowhere to go the following September.”

In those early days she recalls asking a colleague to give her feedback on her performance. “He said: ‘One of the things you are doing right is your car is parked at the front of the building from early in the morning until the evening’. It’s a good lesson I think, that actually being there is quite an important thing, particularly if times are tough.”

One of the biggest – and most controversial – changes Mogel introduced at the college was dropping A-Levels to concentrate on delivering vocational courses, something that she identified early on as one of the college’s obvious strengths. “Some staff were up in arms and some staff did leave because they wanted to teach academic, and that’s fine. But we were really appalling at it [A-Levels] and the schools were really quite good at it, so why would you do it?”

And this wasn’t the only thorny issue she had to deal with. While West Cheshire was “one of the lucky 13” colleges not to lose out in the capital building programme fiasco, Mogel met with strong opposition from locals and politicians to plans to build a new college in the city centre. “They didn’t want, and I quote, ‘more dirty students in Chester’,” she recalls.

She recalls one public meeting, when an opponent of the building programme gave out her home address. “I still had two sons living at home. That was the point where you think, ‘Why am I doing this?’”

While the college now has a “fantastic building” in Ellesmere Port, a few miles away from the city centre, a more central location would have been much better- both for students (many of whom have long journeys to college each day) and the local economy, she says.

Despite her disappointment over the building programme, since Mogel joined the college 12 years ago, success and employability rates have soared.

“We set out to deliver a revolution in vocational education and training. I don’t think you will ever say we have fully achieved that…there are always challenges and new opportunities and some of those I still want to do. Young people understanding all the opportunities that are available to them, not limited by where they live, what colour their skin is, what gender they are or who their parents are is what matters to me. Those are the things I am fighting for.”