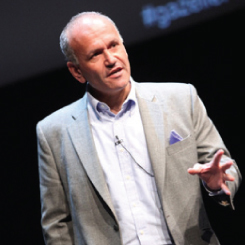 Entrepreneur Doug Richard is to lead an independent review into the future of the apprenticeship programme in England.

The former Dragon’s Den investor has been commissioned by the Department for Business, Innovation and Skills (BIS) and Department for Education (DfE) to look at how the government can build on the record number of new apprentices.

Mr Richard, speaking exclusively to FE Week, said he had been chosen to lead the review because of his extensive history working with small businesses.

“I’ve been asked really to take a forward look at the role of apprenticeships in society,” he said.

“As you can imagine it’s all changing terribly quickly, so I think the value that I bring is just my point of view.

“ I’m to the benefit of – and from the perspective of – small businesses, that’s where my life’s work is and I think that that happened to be something that is important to (the government) at this point in time.”

The ‘Richard Review of Apprenticeships’ will look at what the core components of an apprenticeship should be in the future, considering the needs of the ever-changing economy.

It will also consider how best to ensure every apprenticeship delivers a high amount of quality training, looking at the qualifications and skills which they provide employers
“I think there is a zeal for apprenticeships,” Mr Richard told FE Week.

“Any area where the government is either growing the economy and growing jobs or creating ladders for success, I think they look at and say what more can we do?”

Mr Richard said he is “very open to consultation” and is already drawing up a list of the key stakeholders he wants to hear from.

“I’m putting together a small brain trust of people who I think can bring some innovative thinking, and I’m going to be looking to them to work with me for framing what the potential for an apprenticeship could be,” he told FE Week.

Mr Richard said he hopes to publish the report in October.

“The apprenticeship programme has been a real success, not only boosting chances for young people, but also helping businesses to address their skills gaps.

“However in the past vocational youngsters have been let down by weak courses and our competitors have stolen a march.

“To keep pace it is vital that we build on our initial success and continue to look at how apprenticeships can adapt to meet our future needs in the fast-evolving global economy.”

Mr Richard is the founder of School for Startups, a social enterprise teaching new entrepreneurs how to start and run a successful businesses.

He also produced the ‘Richard Report’ in 2008, a document which investigated the British government’s support of small businesses.

Michael Gove, secretary of state for education, says Mr Richard is a “proper entrepreneur” and will help “get apprenticeships right”.

“It’s great that the numbers taking up apprenticeships has grown, but there are still serious issues,” he said.

“There is still too much bureaucracy getting in the way of small firms taking people on, too much money appears to be going to middle men and the quality of some vocational qualifications taken by apprentices is still not good enough.

“Doug will help us get that right.”