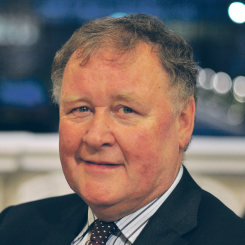 “My father gave me two pieces of advice: ‘don’t do shift work’ and ‘join the civil service,” says Graham Hoyle, of his early careers education.

Growing up in Barton Hill, a “tough, inner-city” area of Bristol, he wanted to join the police force, but years of watching his father work long, unsociable hours at the local chocolate factory put him off the idea. He dropped out of grammar school at 17 to join the civil service.

Hoyle, now chief executive of the Association of Employment and Learning Providers (AELP), spent the next 20 years in the employment service, starting as a trainee on a scheme that was “in every shape or form an apprenticeship.” And despite being fresh out of school, he was placed straight on the front line.“As a 17-year-old, I was sat giving unemployed people advice on their next job,” he recalls. “One has to smile slightly at that.”

The experience made him grow up quick, opening his eyes up to a different side of life, he says. He experienced verbal abuse, had knives drawn on him – and in one unforgettable incident – was threatened by a man who had just been released from prison for manslaughter.

As a 17 year-old in 1964 – a time of “almost full employment” – he was surprised to come across people who didn’t actually want a job. “I quickly realised that many clients were unemployed at a time – and I’m generalising now – when there was no reason to be unemployed, so it opened my eyes to what you would almost call an underclass.”

But there were valuable lessons to be learnt, he says, the most important being that there is no silver bullet for unemployment. “You learn that lesson in a dramatic and extreme way but you learn it quickly; there are things that have to be sorted out before you can get to the real agenda…until you have somewhere to live, income, support for your family, the basic requirements that people like you and I take for granted…you can’t even begin to tackle the issues of finding a job.”

When Hoyle was embarking on his career, in the early 1960s, he had little doubt that “many of those avoiding paid employment were doing so because they were already in unofficial paid work.” The recession that followed in the 1970s changed everything.

And while he is keen to point out that many politicians do have genuine determination and integrity, having spent almost 50 years in the sector, Hoyle believes the government’s enthusiasm to tackle the issue is largely driven by economic forces. “When unemployment goes up, the proportion of the unemployed who don’t actually want to work drops dramatically, yet there is suddenly more talk of the ‘workshy.’ It’s not party political…but it is a truism that the government of the day only starts taking a real interest in the cost of unemployment and the need to tackle it during a recession. The government brings in harsher rules for the unemployed jobseeker at a time when there are no jobs…and as there are more jobs, the pressure comes off. It is totally explainable, but it is slightly worrying because it does tell you that that is driven by government expenditure, far more so than the sort of rather more high-minded aspirations.”

A “proud Bristolian,” Hoyle “resisted, one might even say refused, the career-enhancing move to London” and, after more than 20 years in the employment service,transferred to the training agency, where he ran youth training and other employment schemes in both Plymouth and Gloucestershire.

Hoyle is defensive about YTS, widely criticised at the time for for allowing businesses to benefit from cheap labour for unskilled jobs, saying: “YTS was a product of unemployment and the economic cycle. It was an unemployment relief programme… and one thing that has frustrated, and occasionally annoyed me is that there are too many people who now retrospectively rubbish the weaknesses of the predecessor, when in actual fact they were often effective and the best offer available at the time, and invariably were developed and improved.

“The whole of the environment, the employer… business was contracting, manufacturing was being closed down, and no one had identified that the service sector and apprenticeships were in any way shape or form on the same agenda. The whole environment meant that you had to come up with short-term job replacement schemes, YTS, community programmes…so I do get upset when people retrospectively rubbish programmes of 15, 10, 5 years ago. I prefer to say that it was the best we could come up with under the circumstances.”

After being made redundant in 2000, Hoyle spent two years working as a freelance consultant before joining AELP in 2002. And as he reflects on his time working in the sector (Hoyle is due to retire next year), he says he is most proud of his work on apprenticeships – not least authoring the first proposal paper for the introduction of modern apprenticeships, introduced under a Labour government in 1994.

His initial proposal called for the introduction of a range of apprenticeships from pre-entry to Level 5 – ideas dismissed by the government of the time and the shadow cabinet – now in government – which later began to embrace the idea. So does he feel like thumbing his nose and saying ‘I told you so?’ “Not at all,” he says, mildly “I’m just pleased those ideas are now accepted.”

After almost 50 years in the sector, Hoyle is still passionate about work-based learning., The speech he will deliver at next week’s AELP conference will centre on the need to value vocational skills and give all young people access to independent careers advice and guidance. “Most of us will learn more in the workplace about our jobs than we will ever learn anywhere else, but the reality is that today’s school children are not being prepared properly for their entry to the world of work.”

Ensuring all children have access to independent careers advice and guidance means changing the perceptions of teachers – the vast majority of which are university educated – about all the opportunities available to young people, including work-based and vocational learning.

Hoyle says: “It’s important to say that many schools do a good job, but too many are still not giving pupils the information they need to make informed decisions. It’s only when we start changing mindsets that we can really begin to make progress.”