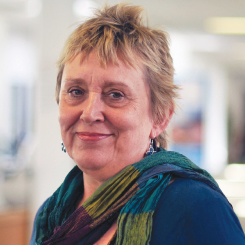 “By any standards, it was a dysfunctional childhood,” says Penny Wycherley, principal of Great Yarmouth College, of her early life.

Born in Stoke, and raised in Oxford, where her father ran a successful chain of electrical shops, Wycherley was educated an independent school, where she jokes the only thing she learned was “how to carry a handbag properly.”

The death of her father, who was killed in a car accident when she just 11 years old, turned her life upside down. The family moved to the New Forest, where her mother ran a business “extremely badly” and struggled to make ends meet, and just two years after her father’s death, Wycherley herself was involved in a car accident, which left her with serious injuries. “When you have a badly scarred face – which is was at that point – people don’t look at you…they look past you,” she recalls.

But those early experiences toughened her up, making her more determined to succeed, she says. “For many people, when a parent dies, they fall backwards. That didn’t happen to me. When my father died, I knew there were a range of opportunities open to me and I suppose I chose to start working at education at that point.

Wycherley went on to study history at Kent University, where she got involved in student politics, most notably, she says with a grin, on the issue of overnight guests. “They had a rule that members of the opposite sex couldn’t sleep in your room overnight, but they wanted to encourage discussion about it… I can remember sitting there and saying, ‘So if I keep my boyfriend awake at night with insatiable demands, that’s fine – but if I let him go to sleep I am committing a breach of discipline?’”

What motivated her back then – giving students a voice – is what continues to drive her now, she says. “It was the 1960s…everyone was involved in student politics, everyone wanted to change the world…now I just settle for making a difference.”

But it took a further 20 years for her to find her vocation in further education. After university, Wycherley joined the NHS, on a human resources management programme, and over the decade that followed, combined high-level management roles – including the tough job of closing hospitals – with bringing up small children, surviving for many years on little more than fours hours sleep a night.

In the early 1980s, having just had her third child, and keen to spend more time with her family, she quit the NHS and went into business with her then husband, buying up failing businesses (mainly post offices) and turning them around.

But while the business was ticking along nicely, Wycherley yearned for another challenge and when an opportunity came along in the early Nineties to teach history part-time at her son’s college, she jumped at the chance. Within three years, she was running a large access and basic skills provision at Chichester College in West Sussex.

There were some governors who were… difficult. I got fed up of being accused of lying to them”

While she admits to being “terrified” by her first session in the classroom, Wycherley was immediately hooked on teaching. “I loved seeing the light in people’s eyes, particularly adult returners, people for whom education hadn’t worked first time around,” she says.

She recalls one student, who had recently been discharged from a psychiatric hospital. “She had never passed anything, was clearly bright but she couldn’t sit in the classroom for more than 20 minutes at a time, so all the teaching had to be structured down to 20 minutes,” she recalls. “She did go on to university and get a first, she now teaches psychiatrists and she is one of the country’s leaders on research around user voice in mental healthcare.”

Having taken on a senior leadership role in 1998, Wycherley became an Ofsted inspector in 2001, where she says she saw many failing colleges. And back at her own college, she was regularly being given the job of turning round departments with difficulties.

It was then she began thinking about taking on a principal’s role, and after her experience as an Ofsted inspector, what interested her most was doing “turnaround” work with colleges. She took up her first principal’s post at South Kent College in Folkestone – where she took up a post in 2006 after a vote of no confidence in the outgoing principal – did offer a turnaround challenge, but feeling unable to gain support from some members of the governing body, she decided to move on after just a year.

“I was being stymied,” she says. “There were some governors who were supportive but there was a big tranche who were… difficult. I got fed up of being accused of lying to them. I stuck it out for a year, at which point I resigned with nothing to go to and no money in the bank.”

After a spell as director of provider services at Tribal, Wycherley decided to set up her own consultancy, specialising in quality improvement for colleges.

But at the end of 2011, she was asked to take on the principal’s role at Great Yarmouth College, which having had three notices to improve from Ofsted was at the time “the worst college in the country by quite a long way”.

It was a “catastrophic” situation, says Wycherley. “The executive team wasn’t speaking to one another, there was a fight in front of Ofsted between the students when they were in…it was endemic.”

What was clear from the outset was that staff did care about the learners, but as Wycherley set about rebuilding the college, there were difficult decisions to make, and inevitably, casualties. “Doing redundancies is always hard,” says Wycherley. “It’s people’s lives. It’s their mortgages, their families and their futures… and yes, of course I lose sleep about it. In that round of redundancies, we took out £600,000 from management. I have a motto: [for carrying out redundancies]‘Do it quick and do it clean.’”

When Ofsted inspectors visited the college in April, they found “remarkable” improvements, with all areas judged satisfactory and some areas good, including the advice and guidance students get in choosing the right course for them.

But there is still work to be done, says Wycherley, who is contracted to stay at the college until the end of next year. Her ultimate aim is to ensure Great Yarmouth continues to have its own further education provision The college is currently in discussion with nearby Lowestoft College about closer collaboration, she says, but that is not the only option available. “What it has to do is to match what the community needs – and by community, I mean the local employers, the businesses, the North Sea…all those people who need support. I want to leave something sustainable.”