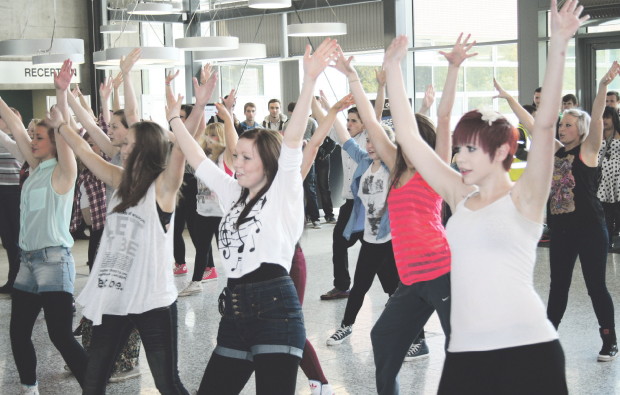 From modern day hits to 19th century classics, the talented students carried out an expertly choreographed performance before leaving just as suddenly as they had arrived – albeit this time to a standing ovation.

Students performed the dance routine unexpectedly during a mid-morning break.

“We were terrified at first but once the music came on our bodies just took over,” said 17-year-old Hannah Davis.

“It was an amazing experience and the adrenaline rush was brilliant, but it was the reaction of the audience that made it all worth it. The exciting performance was the brainchild of performing arts lecturers Katie Gray and Luke Wells – the latter of whom starred in the famous T-Mobile flashmob commercial.

Katie said the students learned the routine in about 13 hours of lesson time.

“They were all first-years and some of them had never danced in public before,” she added. “But they did brilliantly considering how little time they had to rehearse.

“Most flashmob performances are used to promote a product or raise awareness of a good cause, but we just wanted to help brighten people’s day and I think they succeeded with that.”