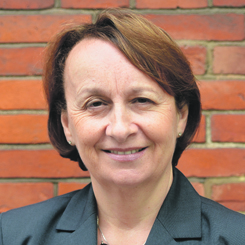 The chief executive for the Edge Foundation talks to FE Week.

If her parents had got their way, Jan Hodges might have gone into banking.

While they valued education and were ambitious for their children, having left school at 15 and had “basic manual jobs” for most of their working lives, they were keen for them to have opportunities they hadn’t. With regular hours and a steady wage, banking seemed like an attractive option.

But teachers at the grammar school she attended in Burnley, Lancashire had other ideas. “They told my mum and dad that I was capable of getting into university,” says Hodges, who is now CEO of the independent education charity Edge.

“I don’t think they would have known that, so I was quite lucky in that sense that I had good teachers who encouraged me and actually said to my parents that I mustn’t leave at 16. I had part-time jobs from the age of 15, and enjoyed working…so without that, I think I would have left school.”

Getting a French pen friend in her early teens, via a foreign exchange programme, opened Hodge’s eyes to the possibility of international travel.

“A lightbulb went off in my head when I met her because I suddenly realised that the stuff I had been learning in class had a purpose,” she recalls. “In those days, you learned languages through the grammar and the rules, through very formal exercises and you didn’t get a lot of opportunity to speak it.

So when I met Chantelle, I suddenly started speaking French and I realised what it was all about.”

After a degree in English and French at the University of Sussex (including a year studying in Montpellier, in the South West of France), Hodges headed off to Pisa with “absolutely no Italian,” where she spent a summer living with a local politician and his family –none of whom spoke any English – which meant learning Italian, from scratch, in a matter of months.

A fifteen-month stint teaching English at an international school near Neuchatel in Switzerland followed. “I thought it was wonderful, because they gave me a little flat close by the lake,” she recalls. “I met people from all over the world and got the chance to hone my French. It was also quite an international community, which I enjoyed.”

But her first taste of teaching wasn’t without its challenges. “The complexities of trying to teach people something you know because you have grown up with it…you have to think about how to communicate that with other people and make it accessible to the people you are trying to teach, so it taught me quite a bit about learning,” she says.

Despite her initial struggles, Hodges discovered she enjoyed teaching and, on her return to the UK in the late 1970s, trained to teach French at Avery Hill College (now part of Greenwich University) in South East London.

But after nine years teaching in secondary schools in Kent and Essex, she felt ready for a change and moved to South East Essex College, where in her own words, she started “to blossom”.

In the fifteen years that followed, Hodges worked towards a masters degree and MBA and held a variety of senior roles at the college, including department leader, head of business development and European coordinator.

She took on the job of principal in 2002 and, just before she left last summer, oversaw a merger with Thurrock and Basildon College, which she describes as one of the biggest challenges of her career.

Her decision to move on came, simply because, after nine years in the role she fancied a change.

Working at Edge appealed because its central mission – championing technical, practical and vocational learning – chimed with her own beliefs. “Most of my career has been spent trying to do that…so it seemed the perfect job for me,” she says.

But there are many challenges facing the sector at the moment, and top of Hodge’s list is dealing with funding cuts and “finding ways to give opportunities to people, but in a more efficient way.”

And attitudes to vocational learning are still a concern. Unlike other countries, like Germany, who have managed to maintain a strong apprenticeship and vocational programme, the UK seems to “have gone down a road where we only value the academic route,” she says.

While she is encouraged by recent government investment in apprenticeships – around £3 billion to date– there is a long way to go in raising the status of vocational education and persuading people of its value to the economy. “We turn out a lot of graduates – and there’s nothing wrong with that, we need graduates – but we don’t have enough people at technician level and that’s something we need to tackle.”

The problem is that information about vocational education and training is not always reaching young people and their parents, she says, citing recent research carried out by Edge in the lead up to VQ day, the annual celebration of vocational qualifications, due to be held next month. The study found that many young people feel they aren’t being given enough information about alternatives to A levels and other academic qualifications.

And in the introduction of the English Baccalaureate, with its narrow academic focus, (students are required to achieve A*- C grades in five subjects, including English, maths, science, a language and a humanities subject) hasn’t helped either. “I know the government says that doing the Baccalaureate doesn’t stop young people doing that (vocational qualifications), but the subjects within it have a certain status and the fact that a vocational option is not one of those – or even a more practical subject like design and technology, it does send out a message to people.”

What it suggests, argues Hodge, is that vocational education is only for young people who are not academic, but this is simply not the case. “Academically able students really thrive on, and enjoy, doing practical subjects…so it should be part of everybody’s programme of study.”
But the increase in tuition fees – due to rise to up to £9,000 a year in September – could change that, says Hodges. “Parents are certainly more willing to listen and know about vocational options than they were before.”

The new government careers service, launched in April, could also go some way to addressing the problem, but only if resources are used effectively and consistently. “Schools are only getting a small pot of money [for careers advice and guidance] and it is a concern that it is spent appropriately,” she says. “I am sure that some schools will deal with it extremely well and give it a high priority, but budgets are under pressure in some other schools and in others, it might not get the same priority.”

If she could achieve one thing during her time in further education it would be to address the imbalance between vocational and academic education, she says. “If you could get that parity of esteem between vocational and academic qualifications and if the curriculum in schools allowed all young people to do both – but that would be the standard kind of programme that anyone would follow in a school…now that would be wonderful.”