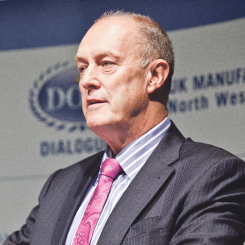 Growing up in rural Lancashire, the young Gordon Birtwistle wanted to be a joiner and undertaker. But while he liked the idea of making coffins, he wasn’t quite so keen on the idea of working with dead bodies.

“That was the job in those days; make the coffins, bury the people or burn them,” he recalls, grimly.

When he left his secondary modern school at 15 (having failed the 11 plus examination “miserably”), Birtwistle did apply, unsuccessfully, to be an apprentice joiner and coffin-maker.

He ended up with a job at a textile machinery manufacturers in Accrington, and by the time he was 21, was a qualified jig and draughtsman, with two higher national certificates under his belt and no regrets about not making it as an undertaker.

But it was tough going. The Liberal Democrat MP for Burnley recalls: “I worked in the skill workshop, as a mechanic and in the machine shop repairing the machines. I worked with the ‘mill rats,’ men who moved heavy machines around the plant, and I worked in the foundry with molten metal. I did everything.”

And on top of a 46-hour working week, including Saturdays, Birtwistle also went to college three nights-a-week and spent most of his weekends studying

But life was hard for everyone in Lancashire back then, he says.

His parents grew their own vegetables and bred chickens and rabbits to feed the family and Thursday night was “always mashed potatoes because that’s all we had left.” His mother couldn’t afford to buy anything else until his dad – a wood pattern maker – came home on Friday with his wages.

After ten years working in engineering, including a stint as a sales rep, selling machine tools, Birtwistle decided to set up his own engineering company.

He became a local councillor in the early eighties and Burnley Council leader in 2006, but despite having three attempts at winning a parliamentary seat, he never seriously thought he would become an MP.

In fact, he jokes, he only made a third attempt – in the 2010 general election – because he was the only candidate that could afford to buy the leaflets.

Much to his own surprise – and his colleagues in the Liberal Democrat party – he won, by a majority of almost 2,000. But becoming an MP, at the age of 66, came as a big shock to Birtwistle, who had just retired.

“I had a load of mates at the allotment, I was growing veg, I’d won a prize for my tomatoes, I was taking the grandchildren to school…it was great fun. And all of a sudden I was back in it,” he says.

But becoming an MP in a former Labour stronghold (the seat had been held by the party for 77 years) brought challenges. Having run the election campaign from a room over the top of a funeral parlour, Birtwistle realised he needed an office and some staff – and he needed them fast.

It’s all very well getting these results, but when the young people can’t get a job afterwards, that’s defeating the object”

Within the space of a couple of weeks, he had acquired, decorated and furnished an office, recruited a team of staff for both Burnley and Westminster and been appointed parliamentary undersecretary to the chief secretary to the treasury, Danny Alexander – quite a lot to take in for a man who “had only been to London about seven times in my life.”

While he still doesn’t like London, Birtwistle has settled into his new role. And earlier this year, he became chair of a new All Party Parliamentary Group dedicated to apprenticeships.

Launched by the awarding organisations EAL and IMI, the group will focus on the changing needs of employers and apprentices across the engineering, manufacturing, building and automative sectors.

“We have to up our exports, we have to get rid of our balance of payments deficit; once we have done that, growth will fly,” he says. “But growth won’t fly unless we have people to ensure we do it.

“When I started work, manufacturing was at least 40 per cent, maybe 45 per cent, of GDP. We didn’t have balance of payment problems in those days, even though we didn’t have much money.

“But in the last 30 years, manufacturing has been allowed to decline and previous governments have banked everything on the service sector and the city. The city catches a cold and we all catch pneumonia.”

In Burnley, where the majority of jobs come from manufacturing, many companies have permanent vacancies because they can’t recruit enough skilled workers, he says.

Burnley’s biggest company has an average age profile of 45, and there are too few people coming up behind them.

“I think it is completely tragic when we have young people who can’t get jobs, so let’s kill two birds with one stone and train young people to do the jobs of the future, so that the companies that we have, that are prospering, will have the staff in the future.”

But “Mickey Mouse apprenticeships are no good,” he says, by which he means short apprenticeships, particularly in the retail and service sector, some of which can be completed in as little as 12 weeks.

“We have got to have proper apprenticeships where people do proper training for a period of time until they are skilled at their job. My apprenticeship took five years.

I wasn’t qualified and I didn’t get full pay, until I had served my time. I accept now, with modern technology, they [young people] don’t need to do five years, but they certainly need to do three years.”

The reason some young people are not considering apprenticeships, is because their perceptions – particularly of manufacturing – are outdated, he says.

“It’s not the Terry Webster type engineering that you see on Coronation Street with dirty overalls on and an oily rag in his top pocket. That’s not engineering any more – it’s high-tech manufacturing.

But if attitudes are to change, young people must have access to good quality independent advice and guidance – something that has been lacking in schools for the past 25 years, says Birtwistle. “Secondary schools should be more involved with careers than they are at the moment.

“I think they are more concerned with meeting targets, five A*-C including maths and English, and they have taken their eye off the ball on what they do once they have left. It’s all very well getting these results, but when the young people can’t get a job afterwards, that’s defeating the object.”

Birtwistle is amongst those Liberal Democrat MPs who voted for a rise in university tuition fees. And he is keen to point out that he did challenge Vince Cable on the detail of the policy, including how the new tuition fee structure would affect students from disadvantaged backgrounds.

But he is unrepentant about his decision, saying the increase was necessary to help get the country out of economic trouble.

“Danny Alexander’s predecessor left a little note saying, ‘There’s no money left. Good luck.’ Now, I’ve been brought up that if you’ve got no money, you don’t spend it.”

If he could achieve one thing during his time as an MP, it would be to see manufacturing up to a minimum of 20 per cent of the UK’s GDP, he says.

“If we get it to that, then apprenticeships will follow, there won’t be as many young people out of work, the balance of payments will be almost resolved and we will have massive growth in the economy.”