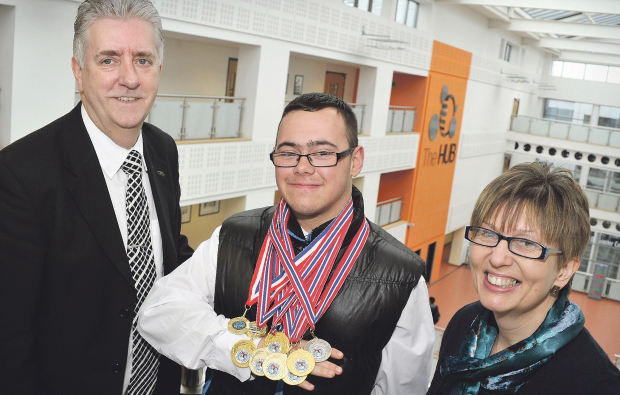 A life skills student at Doncaster College has returned from the European Down Syndrome Open Swimming Championships with a stack of medals.

Ben Sweeney is quite used to winning competitions around the world and has more than 800 hundred medals in his bedroom, so he has a dilemma of where to put his tally of eight Golds and one Silver from two days of competition at the Quays in Southampton.

Ben, who recently turned 19, clocked up two world records at the event.

He became the fastest in the world in the 100 metres breaststroke and the 50 metres backstroke.

Ben has been swimming since he was three-years-old and although he prefers the backstroke, he will turn his arm to the breaststroke, butterfly and freestyle events.

Ben is in his last year at college and wants to work with children as a coach but he wants to carry on swimming as well.

He said: “I just want to get better and better and make my family proud.”