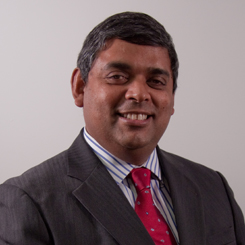 For a man who has risen through trade unions, government quangos and the skills sector for more than three decades, Peter Pledger gives off an incredible sense of calm and modesty.

“The game plan has always been to avoid bankruptcy,” he says simply. “As long as I can do that I’m happy.”

As chairman of the Confederation of Apprenticeship Training Agencies (COATA) and chief executive of South London Business – a company which delivers apprenticeships both as a training provider and ATA – he’s certainly kept busy. His office, based in Croydon, is a rather simple affair, but he’s quick to dispel the miserable weather outside with a warm smile and welcoming handshake. It’s as if he has all the time in the world.

Growing up in Highbury at a time when the Victoria line didn’t exist, Peter recalls London as being a “grimy” and “dirty” place during his childhood. The avid Chelsea fan, whose parents moved to England from India, was one of only three black children at his school and thought of it as “quite a hostile place”.

“Bits of London were quite nasty,” he says honestly. “There was a lot more overt racism and a lot of attacks at the time. The national front were everywhere in Islington and so you had to get quite tough, quite quickly.”

Self-proclaimed as being “useless” at school, Peter admits he quickly blew his A-levels after spending too much time in the pub. But don’t count him out as a slacker. On the side Peter also worked as a hospital porter, carrying out the unenviable task of “shifting dead bodies” and cleaning up the subsequent mess.

“The overwhelming feeling about being a porter is that you’re waiting for the minutes to go by – every minute dragged,” he explains gloomily.

“When someone died or something horrible happened it was great, because you could actually do something, but most of the time you were waiting, and it was just a horrible way to do something.”

Throughout these humble beginnings Peter stumbled across a love for politics. The hospital, which was set to be closed down by the NHS during the 1979 general election, suddenly became a political campaign backed by a number of politicians including Margaret Thatcher.

Suddenly I heard the bolt go in the door behind me, and he said ‘well you’re not going out mate until you do sort it out’. I was on their side, but that was just how it was!

It helped persuade Peter to return to education, where he enrolled at St Mary’s University College and became vice president and later president for the Students’ Union. Alongside his studies Peter twinned the college with Birzeit University in Palestine.

“When we turned up there the Israelis knew who we were and what we were coming for, and while I’m not taking sides in the dispute, they couldn’t have been more horrible,” he explains. “Wherever we got into a taxi, they used to just slash the tires. One of the people we were going to meet was even shot – not killed – but shot before we met them.”

Peter recalls, then aged 21, being bundled out of the back of a building and switching cars in a bid to meet his political equivalent from Birzeit University.

“Our line was that we weren’t taking sides in the dispute, what we wanted to do was help other students to learn and to grow,” he says.

After a short spell date stamping post at Camden Council, Peter was elected as a shop steward for the National and Local Government Officers Association (NALGO), a trade union which would later merge to become Unison. Peter was then quickly snapped up by the TUC, setting in motion a lengthy career in union work.

The job at TUC was “brilliant”, Peter says, and allowed him to meet a number of renowned politicians, including a very young Tony Blair.

“I wasn’t impressed,” he says with a chuckle. “He just didn’t know what he was talking about!”

The National Union of Public Employees (NUPE) then invited him to be a representative for Thames Water, putting him in charge of all disputes and negotiations regarding pay, terms and conditions, grievances and disciplinaries. In our interview he recalls a particularly nervous visit to Beckton; one of the biggest sewage works in Europe.

“They took me into what they said was their mess room, and there were all these blokes – and I’m not small, but these were big guys – who said ‘well all of our pay has been stopped.’

“So I said ‘okay, let’s sit down, let’s just go through the details and try and understand how it’s all working, and then we’ll sort it out’. Suddenly I heard the bolt go in the door behind me, and he said ‘well you’re not going out mate until you do sort it out’. I was on their side, but that was just how it was!”

The impact of education, and in particular the necessity of being able to read and write, also became apparent to Peter during his time at Thames Water. In one particular incident, Peter recalls a group of men who refused to use new machinery.

My budget at the time was a quarter of a billion pounds a year. My personal spend authority, so money i could spend without asking anybody, was a million pounds worth of public money

“They came up with every excuse under the sun…but then I worked out what it was. None of them could read the manual. They couldn’t read and they had never needed to read, because they had worked on the same machinery that their fathers before them had, or that their friends had shown them.”

The union representative was later invited to chair the lifelong learning forum and also joined the board for the West London Training and Enterprise Council (TEC), which at the time was in charge of delivering apprenticeships in the surrounding area.

“All these things were unpaid, but that’s the way of life,” he says with a grin.

In a high-risk move Peter then applied to become the deputy chief executive of the London TEC council, which was set to be abolished by the Conservatives following their rise to power.

Peter knew that once the TECs were abolished, he would then be well placed to secure a position at one of their replacements, the ill-fated Learning and Skills Councils (LSC). It paid off. He was appointed alongside 46 other executive directors and later briefed by David Blunkett at a motorcycle factory in Birmingham.

“He gave us our instructions and said right, you’ve got until 9am on the 27th of March to be up and running, but you have no office, no staff, not even a PA, and you’ve got to make it work.

“On the first day you’ve got to control the funding of every FE college in your area, every adult and community institution in your area and all your work based learning providers.”

It was the challenge Peter had been waiting for.

“Not only could I think about solving the problems, but I also had the money to do it. My budget at the time was a quarter of a billion pounds a year. My personal spend authority, so money i could spend without asking anybody, was a million pounds worth of public money.” He adds: “Problems came along, but we fixed it.”

Peter spent seven years leading the LSC, training 34,000 people to read and write in the process, but left the organisation in 2006 when he felt his powers were being constrained.

“The ministers wanted greater control, they didn’t want appointed people spending money the way I was spending money. I could see all of that and therefore it became more rigid, less interesting.”

Peter then set up a consultancy, as he says “everyone does”, before being approached for the chief executive position at South London Business. The company, which he says “was running out of steam” when he took over, now has a healthy turnover of roughly £4-5 million.

And while it still offers business support, Peter has expanded its operations to become a training provider and ATA for apprenticeships.

“The problem for every single government body is how to get to employers. Well, this is a business organization, I start with the employers and thats what I do all the time… I’m constantly talking to businesses,” he says. “That’s why our ATA works and that’s why our skills bit works.”

Peter is also chairman of the Confederation of Apprenticeship Training Agencies (COATA), a membership group which he helped setup to try and protect the model from malpractice.

“I wanted to get rid of the scams. There were too many people saying they were ATAs who simply weren’t ATAs. I wanted to get them out of the market; this is to clean it up.”