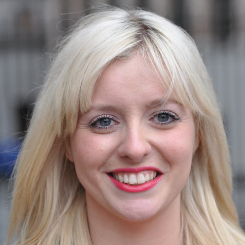 “The worst thing that could happen to me is for someone to say that I didn’t try hard enough,” says Gemma Knott, the 157 Group’s policy and communications officer.

A self-confessed “geek,” she loved reading and writing from an early age and excelled academically. But there were few role models on Northfields estate in Leicester where she grew up.

“There were low aspirations, a lot of people living on benefits and struggling with money, and once you’re on an estate like that, it can become a vicious cycle; you don’t broaden your horizons and it gets harder to escape.”

While her own ambition, and her parents’ support, undoubtedly had a role to play in her educational success, Knott says she also benefited from the Aim Higher scheme, an initiative developed under the last Labour government, which aimed to encourage young people from deprived areas to consider higher education.

This gave her the opportunity to go to open days and summer schools at various universities – including Oxford, where she was later selected for interview. Although she learned a lot from the process, it was a “very daunting experience,” she says.

“I am an ambitious person, but I still felt like I stuck out like a sore thumb at the interviews.

“Talking to the other applicants – and this might sound judgmental – they did sound like they were born with silver spoons in their mouths; they weren’t just comparing grades, they were comparing 100 per cent scores. There was a very competitive edge to everything.”

While her Oxford application was unsuccessful, Knott was offered a place to study history at Warwick University. And while her parents – a forklift truck operator and an administrative clerk – were supportive of her aspirations, they did worry about her getting into debt.

“No one in my family had ever been to university – not many of them even own their own houses – and in that kind of culture there is a fear factor about owing money,” she says.

Among the first cohort of students to see tuition fees rise from £1,000-a-year to more than £3,000-a-year, Knott says she can empathise with prospective students (who, from September, will have to pay up to £9,000-a-year) who are fearful of debt. “When you’re from that kind of background, you don’t want to spend any more than you earn.”

Determined not to be a financial burden on her parents, from the age of 16, Knott held down numerous part-time jobs, including several stints as a tour guide at Buckingham Palace. In the final year of her degree, she got up at five in the morning to do a cleaning job at the university.

“I think my housemates thought I was crazy, when they heard the front door closing at 5am,” she recalls. “I got the 2:1 I wanted but, when I look back, I wonder how I did it.”

While she admits she “could have slowed down at bit”, juggling education and part-time work stood her in good stead when it came to finding her first job, she says.

“I made so many friends, I networked and I earned my money and learned the value of a hard day’s work. When I worked in a call centre, I learned how to listen and all those other soft skills employers really want… it’s amazing how many people are clever and have qualifications that don’t have that.”

After graduation, Knott had set her sights on a career in law, but a short-term temping job – covering for the PA to the principal of Warwickshire College – changed everything.

“It was never my choice to go into the education world but once I started work at Warwickshire College, I loved it,” she says. “I saw how hard-working and how innovative FE staff are, and I loved the buzz and the atmosphere at the college and how forward-thinking it was.”

Landing her current job at the 157 Group – less than a year after graduating – is the best thing that has ever happened to her, she says.

While there is no “typical week,” her job can involve anything from writing press releases and policy briefings to having tea at Number 10.

“I have to pinch myself sometimes with the people I get to talk to, but at the same time I have to keep myself grounded because I have to bear in mind it is all about the learners,” she says.

“You can’t get carried away, having tea and wining and dining in the House of Lords, because you have to remember you are there primarily for the learners and the agenda of the membership.”

Knott admits she is her “own worst enemy” when it comes to workload and is so full of ideas, she sometimes ends up working around the clock to get things done.

“I have so many ideas and I guess I have an advantage with my age and not being out of university that long, which means I can empathise with learners and what their problems are.

“It is a busy role, but I do make time for other things as well.”

Whatever role I do, for me it will just be a blessing to stay in the sector”

After taking up running just a year ago, Knott recently completely the Paris Marathon, raising £800 for the Stroke Association and is already considering training again for another long-distance run in the future.

At 23, she is relaxed about her future career plans, although she would like to remain involved with the FE sector. What continues to drive her is her aspiration for all young people to have the chance to fulfil their potential, she says.

“I like the policy and communication side of things, but whatever role I do, for me it will just be a blessing to stay in the sector. I’m always looking for the next strategic challenge in FE and I have got so many ideas whirring around in my head – as long as I am in the sector I will be really happy. I guess it all comes back to what education has done for me; I want to make sure that all learners have access to the same kinds of opportunities.”

But she “would be lying” if she said didn’t ever feel she was taken less seriously by colleagues in the sector because of her age. “I have often felt that when I walk into a room of one of these national groups ‘Hmm, she’s a bit of a whippersnapper,’ but in a way that’s my own insecurity and I think people judge you on your outcomes.

I hope that I have now gained a voice at the table and that my age is no longer a reflection of my abilities.”