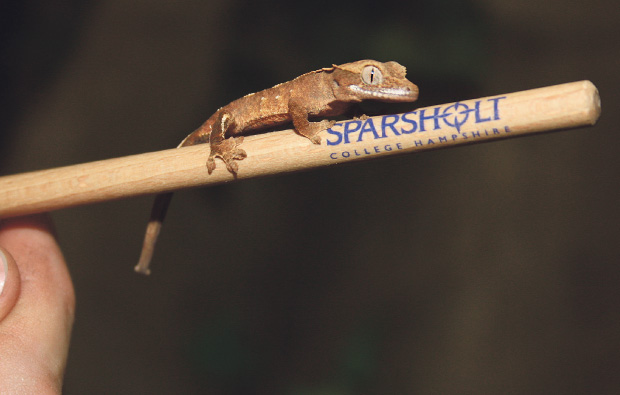 There are three new additions to Sparsholt College’s animal management collection following the successful breeding of their Crested Geckos. Three eggs were incubated and hatched to produce the tiny lizards which have proved an instant hit with staff and learners alike.

The Animal Management Centre at the College houses three adult Crested Gecko’s which consist of the breeding pair and one lone male. The hope is that the newly arrived baby Geckos will turn out to be female (currently too young to sex) so they can be introduced to the lone male to hopefully produce more eggs.

Native to New Caledonia, the Crested Gecko (Rhacodactylus ciliatus) was thought to be extinct until it was re-discovered in 1994. Despite this relatively recent discovery, the Crested Gecko has been extensively bred by breeders and as a result is now one of the most commonly kept pet species of lizard.

The baby Geckos will join the 600+ animals from over 100 species the College has on site to provide practical training for their Animal Management and Veterinary Nursing students.