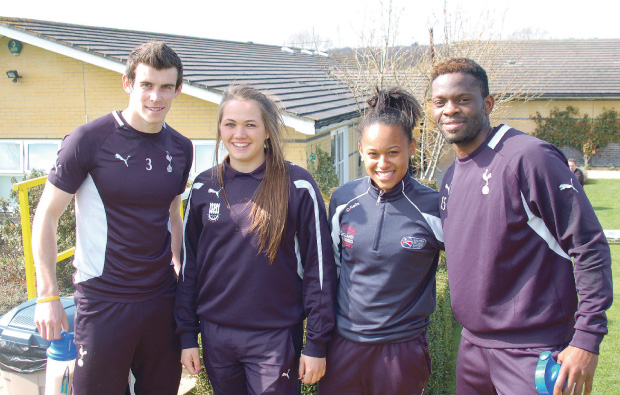 The football students, Ryah Vyse (19) and Siobhan Wilson (17) both recently qualified for the BCS (British Colleges Sports) Ladies England squad; the national team recently played against and beat Wales to win the coveted Anglo Welsh Shield. As well as playing for the BCS team, Ryah also plays for Middlesex County and Tottenham Hotspur Ladies first team, she has been with the club since she was 10 years old and Siobhan also plays for Tottenham Hotspur Ladies under 21’s team.

The event was held to congratulate the girls and raise awareness of the Tottenham Hotspur Foundation’s (THF) Education and Football Development Centre programme in conjunction with Barnet and Southgate College.

The girls met with the club’s first team squad and even practiced alongside the likes of Gareth Bale and Louis Saha (picture).

College principal David Byrne said: “Ryah and Siobhan have demonstrated that investing in hard work and training really does pay off.”