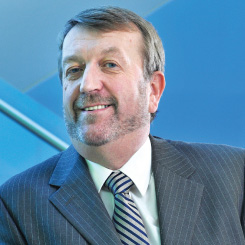 Born into a family of mill workers, machine operators and motor mechanics, John Widdowson jokes that he is the first in his family who hasn’t had to work for a living.

Growing up in Lancashire, he was a studious child, who – much to the despair of his father and grandfather – was absolutely “useless” at working with his hands.

Now principal and chief executive of New College Durham, the young Widdowson had his heart set on a career in law, and after O and A levels at Audenshaw Grammar School (a selective boys’ school in Manchester), went up to Durham University, where he did a law degree, followed by a legal practice course and MBA.

He fell into education by accident, after taking a teaching job at a college to earn some extra cash – and was hooked immediately. He recalls: “It was very odd coming from a post-graduate business school into an environment where I was teaching girls on a secretarial course who had left school at 15 and trying to get them to try and think outside the box.

“Then there was a group of lads who were working for the post office whose job was moving mail bags on and off trains – just realising that after whatever they’d done at school they still couldn’t read or write properly, and having to cope with that while trying to get them to do something else – it was just a big challenge.”

Teaching appealed to his keen sense of social justice and offered pace and challenge, he says. “Young students, particularly those less able, make a lot of demands on people and you have to be intellectually and emotionally right up for it. It’s much more adrenaline-generating being in a classroom…even in a court of law you are never under quite the same pressure.”

Having abandoned his plans for a career in law, Widdowson quickly rose through the ranks, before becoming a principal at just 42, making him one of the youngest college leaders in the country at the time. But he never set out to become a college leader, he says. As he became more experienced, he simply realised that leading a college would offer him the professional challenges he needed.

It didn’t take me long to think that principals of colleges do have a lot of responsibility but also a lot of opportunity to effect change, which you don’t get in many places”

“I know that sounds very pretentious and all the rest of it but it’s one of the few jobs where you can do that and therefore it is a job that is still worth aspiring to,” he says. “It didn’t take me long to think that yes, principals of colleges do have a lot of responsibility but also a lot of opportunity to effect change, which you don’t get in many places.”

What appealed about the job – and what still motivates him now – is the variety. He might be visiting a local school, negotiating sensitive human resources issues or making multi-million pound financial decisions – all in the course of a single day. And because “colleges never close,” there are constant challenges, he says.

“There is always something going on, even in the depths of the summer holidays. You finish one academic year and you have the A-level results coming out in mid-August, GCSEs at the end of August, so the cycle starts again…and you can do all that planning and then something comes up that is more pressing to deal with. You have got to like that sort of dynamic environment; it’s what makes it interesting.”

Widdowson is particularly proud of college’s capital rebuild project (which involved selling one campus and building a new one from the ground up) and the links it has made with local schools. New College Durham now sponsors two local academies – both with complex histories and big capital build projects attached to them.

The biggest challenge facing the sector at the moment is financial uncertainty, he says. The impact of funding cuts – in particular the demise of the EMA – has hit young people where it hurts. “Now you have got to really convince them [young people] of the benefits of getting qualifications and sticking with it.

“We have a large NEET group and we are constantly trying to find different ways to engage them and find different sorts of courses to get them on. And we have to constantly refresh that, because what worked three or four years ago may not work now.”

But if he has learned one thing during his 30 years in further education, it is that, as a leader, certain things are out of your control. What matters is how you respond. “Colleges reflect the real world. You can’t always manage the environment outside the college, and if that’s volatile and things are happening out there…they are not ivory towers. And so as a senior leader in a college you have to lead that response.”

In a college like this you value every level of achievement; whether an academic getting an honour’s degree or it’s a special needs student who learns to live independently”

What continues to inspire him, he says, is seeing students succeed – some of them, against the odds. “You have only got to see our graduation ceremonies and see people who have made a significant change in their lives through education…and if the college wasn’t there that wouldn’t have happened.

“In a college like this you value every level of achievement; whether that is an academic getting an honour’s degree or whether it’s a special needs student who learns to live independently. They are all equally valuable.”

One particular example sticks in his mind. “One of the staff had a very serious, and I mean life threatening, illness. She was in intensive care for weeks and when she came round from this, she discovered that one of the nurses in the ICU was one of the college’s former students who she had actually counselled to go on an access course. And he had gone off and done a nursing qualification and was now a highly qualified intensive care nurse who was helping her to survive this really serious illness. It’s not fate, because I don’t believe in that sort of stuff, but it shows you how things have a habit of paying off.”