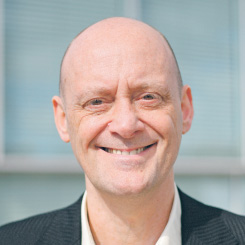 “I didn’t think I’d ever be a principal,” says Lawrence Vincent, who has been principal of Bournemouth and Poole College for the past four years, before adding: “I wasn’t a career academic.”

Although the sentiment is often banded around, with Vincent, a man who openly admits that he is happier away from of the spotlight, you get the impression he really means it.

But here we are, in the 51-year-old’s impeccably tidy – but modest – office where we find each other discussing his life’s work.

So how did it happen? How does a man who has the impressive and intriguing CV which includes a fleeting career in the music industry and work to help rehabilitate offenders in the USA become a principal?

It began for Vincent in Leeds, a city he is proud to say he is “born and bred” in, but one which he was keen to leave – and move away from quickly. “It was a hard city. I left Leeds as soon as I could,” he says.

Vincent attended Sherburne High School, but “didn’t enjoy” his time there, insisting that he “did okay and moved on” after his exams.

Despite disliking growing up in the city, Vincent still today holds a high affection for his beloved Leeds United.

Heading away from the city in the late 1970s, Vincent moved down to London where he studied humanities at Greenwich University.

“I enjoyed London a lot,” he says, adding: “I was pleased to be away from The North and doing something different.”

And it was while living in the capital that Vincent was able to develop one of his main passions in life; music.

We take public money and have fantastic resources so we should be more generous with our time, space and expertise”

Working at record store, HMV, he immersed himself in the New Wave movement and started promoting and managing young bands.

Although none went on to become huge stars, it was a time of his life that you sense he thoroughly enjoyed.

“It was interesting. I enjoy going to see bands play live. It’s a big part of my life,” he adds with a smile.

However, it was then that Vincent’s move into education began.

While working at a community radio station he became involved in “social issues and social problems” and shortly after he started as a youth worker in Thamesmead – an area which at the time suffered heavily in the recession.

“Through that, I started to get philosophical at people who weren’t achieving, rather than at those who were, and that defined my interest in teaching and in education,” he explains.

However, it was then that the opportunity came up to work in juvenile correction systems in Boston, Massachusetts

Although he knew it would be a challenge, he insists – as a man in his late 20s – it was something that he had to do.

“I was teaching English to kids who were mostly Hispanic. We had a lot of challenges. When people say the kids are difficult here, the benchmark I had was completely different,” he says.

Despite the many challenges, it was a part of his life which he talks about with great affection and thoughtful reflection.

He says: “America seemed like ‘the promised land’ so if you had the opportunity to go there, you would take it.

“Living there in your late 20s is a fantastic experience. It felt different to here. It felt a bit more exciting and rewarding.”

However, by the late 90s, he moved back to England after taking a job teaching at South Thames College.

“I didn’t find it easy to adapt in America; I missed London. I find London is full of good ideas for colleges,” he says.

As well as those ideas, Vincent brought back across the pond his own new ideas for how he could develop the sector.

“When I was in America, I was attached to a community college, so I brought back a real belief that colleges in the UK should become more involved in local communities and I’ve held that ever since.

“I fell in love with the college sector. They are fantastic, vibrant, interesting places,” he says.

However, ambition soon took over from the love affair with London in his heart when the opportunity came up to become the new head of department for social and community studies at Bournemouth and Poole College.

He would then swiftly become the college’s vice-principal and then – four years ago – he was named its principal.

“I was always feeling I could do the job of my line manager,” he says, before adding: “But this is enough for me; I have no great ambitions after this.”

Vincent then jokes about his desire to own a jazz club, but admits it is more of a pipedream then a realistic option.

And it is then that we move onto discussing his three children.

He tells me that eldest daughter Jordan is studying business management at nearby Bournemouth University, while his son Kit is studying music at his father’s college, before heading off to Sussex University next year, and his youngest daughter Mya is working hard towards her GCSEs next month.

Like-father-like-son, Kit is also in an up-and-coming band – he is the drummer for Kinnie the Explorer (Keen musician and FE Week head designer Dan Duke has played on the same bill as Kit’s band and gives them a top report). Vincent urges me to check them out as soon as I can when I get home.

But how does he balance the rigour of being a principal, with seeing his family, as well as finding time for his hobbies?

“The job of a principal is demanding and all engulfing, so you have to create an offer for this, and your time with your family, but you have to work at it,” he says, particularly when “there’s never been a harder time to run a college”.

He adds: “Expectations are increasing and changing.

“The way in which we have to be measured is changing and it will have a significant impact on us.”

He adds: “It’s a challenge to implement the recommendations of the Wolf Report, but I’m a devotee of Wolf.”

And what about the new college freedoms handed down from government? Vincent believes that it is the colleges who can “make sense” of them which will be the ones to “flourish” with them.

However, he does not think deregulation will lead to privatisation of colleges – as has been suggested in some quarters. “We need businesses to work with us, not control us,” he says.

Vincent is also delighted that his college is the first to sign up to the NCFE and Reed employability partnership.

But, what about the future for colleges?

Although he praises existing community work, including the ideas within the report released in November by Baroness Sharp, the chair of the Independent Commission on Colleges in their Communities, alongside NIACE and the 157 Group, Vincent says: “I think that we can go further.

“We take public money and have fantastic resources so we should be more generous with our time, space and expertise.

“We are developing enrolment, so local people use the facilities but don’t enrol on courses.

“So that’s like using our libraries and IT. We’ve even had elderly people who come in for hot meals. People say it’s not easy, but it is.”