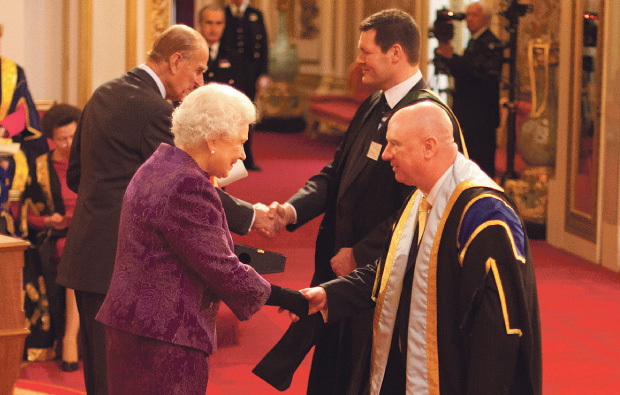 Staff and students from South Nottingham College’s Balls to Poverty programme were presented the ultimate education accolade by The Queen.

The college was one of 21 prize-winning universities and further education colleges in the ‘Diamond Jubilee’ (ninth) biennial round of the Queen’s Anniversary Prizes.

It recognises and celebrates the outstanding work within higher and further education institutions and the impact that they have.

Prize-winners were awarded with a silver gilt medal and certificate signed personally by Her Majesty the Queen.

Chair of governors Keith Beaumont, principal Malcolm Cowgill and Balls to Poverty managing director, Joe Sargison accompanied five students who have all been involved in the programme to Buckingham Palace.

Mr Cowgill said: “Balls to Poverty was set up to tackle major social challenges at home and abroad through sports training and football.

“It has had benefits for both the volunteers involved and the children in communities in Nottingham and South Africa that it has reached.

“We are extremely proud for the college’s work to be commended by this award.”