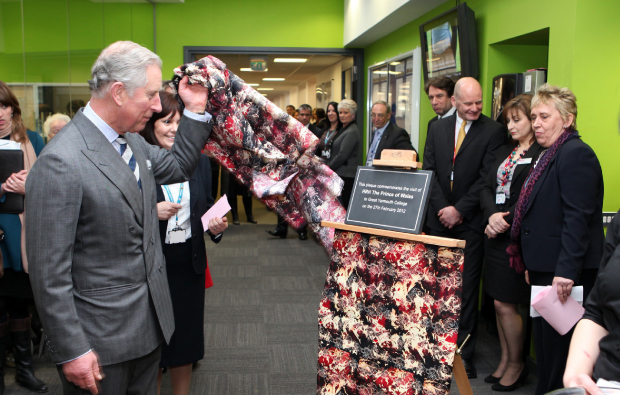 Students at Great Yarmouth College treated the Prince of Wales to a showcase of vocational skills when he visited their campus.

The Prince even tried his hand at construction skills in the brick workshop and later asked catering and hospitality students if canapes they had designed and created specially for him could be boxed for him to take away.

Principal Penny Wycherley and chair of governors Dr Michael Field greeted the Prince on his arrival at the college’s two-year-old £6m Home of Construction, the Kier Building

Second year Level 2 diploma student Ricky Turner (18) said: “He was surprised by how much cement you need to lay a brick.

“I was a bit nervous, but it was nice to meet him, it’s something different.”

The Prince also saw a 1950s–design speedboat made by young apprentices on the college’s 14-16- programme and stopped to chat to crowds of students and pupils from nearby schools who lined the route to the opposite campus, where he was greeted with singing and dancing by 27 performing arts students.

Mrs Wycherley said: “He was amazed by the sheer variety of the training that happens at the college and how confident and enthusiastic all of the students he met were.