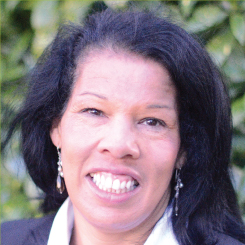 Maxine Room says she was never an “archetypal academic”. A mischievous child, who liked to chat, her school reports typically read: “could do better if she concentrated.”

Neverthless she left the Skinners Company School for Girls – a selective grammar school in north London – with a good clutch of qualifications and went to Bath College of Higher Education (now Bath Spa University) to study home economics with teacher training.

Thirty years on, she is in her third principal’s post at Lewisham College and facing one of the biggest challenges of her career to date – a proposed merger with Southwark College.

Room, who started her career as a home economics teacher at Bridgwater College in Somerset, says she never set out to become a principal.

Her ambition was to “be the best I could be in the job I was doing” and despite being promoted to middle and senior management posts at both Bridgwater and Filton Colleges (where she became vice principal for curriculum) it was only after prompting from Robin Landman, the chief executive of the Network of Black Professionals, that she started to give the idea some serious thought.

She got the second post she applied for, becoming principal of Swansea College in 2003 – and only the second black female college head in the country.

Four years later, Room moved to Leeds, where she oversaw a large scale merger –bringing three colleges into one – but, to her disappointment, was not appointed principal of the newly merged Leeds City College.

It’s about making it all work in a way that is going to make our learners successful, and keeping the ship going in the right direction”

While she admits that missing out on the job was hard at the time, she is philosophical about the experience. If it hadn’t happened, she may not have ended up in back in London – where her family is still based – as principal of Lewisham College.”I think things happen for a reason,” she says. “I never thought I’d work in London again and I felt like a tourist when I first came back … but I’m glad things have come full circle.”

When she joined the college, two years ago, she was the only black female principal of a general FE college in London.

Does she think it is still more difficult for black professionals – and particularly women – to get to the top in education? Her answer is careful. “I mentor people, and whether they be men, women, black or white, there’s something about confidence and attitude and building your armoury and being credible no matter what colour or gender you are…but patently, some people don’t get over the threshold, so there are some issues about, you know, what is it that makes the difference.

“Perhaps it is something about the makeup of governing bodies – their ethnicity, gender, disability profile…it’s those stereotypes isn’t it and you’ve got to break those down.”
Stepping into the shoes of the outgoing principal Dame Ruth Silver – a respected figure across the FE sector – was a daunting task, but Room, who describes herself as “practical” leader, says she hopes she has put her own stamp on the college.

But being a principal is not without its challenges, she says, not least having to be a “jack of all trades.”

One day, she might be talking to an MP about education policy, the next a student with a complaint they have about a course.

Just keeping up to date with policy changes, “crystal ball gazing” about where both the organisation – and the sector – is heading, can be exhausting. “It’s about making it all work in a way that is going to make our learners successful, and keeping the ship going in the right direction,” she says. “We [the college leadership team] are constantly analysing, interpreting, identifying and strategising…”

Maintaining a healthy work life balance can also be tough. While Room works out at the gym most mornings, and is mindful to take time out for herself, she admits the edge between work and home life are often “blurred” and there are times when she is sending emails at midnight or working during her holidays.

And with the merger with Southwark College due to take place at the end of June, there are even more meetings and networking events than usual to attend at the moment.

But she is keen to stress that she wouldn’t have it any other way: “I don’t want that to sound as though it’s in any way a heavy burden, because I think it’s given me incredible opportunities and I’ve met some amazing people.”

And she is passionate about the coaching and mentoring work she does for Network of Black Professionals.“When my mentees come back and said I wouldn’t have got that job without you, you’ve really helped…that’s really rewarding.”

If you’ve got qualifications or had experiences through training and development, it changes you and it gives you more choices”

Room attributes her strong work ethic to her mother, a single parent who worked three or four jobs at a time to support the family.

A tailoress by trade, Room recalls her mother sitting up sewing late into the night while holding down administrative and retail jobs during the day. “I learnt a lot from just observing her and the way that she worked and the way she filled time,” says Room. “People say ‘how do you fit everything in?’ and I think, well, it is a bit of a jigsaw puzzle but I plan and think and sometimes you do get in a mess, but you get out of it again and I’ve got incredible support mechanisms in college.”

Her mother’s belief in the transformative power of education (she was “adamant” her daughter went to grammar school and benefitted from many of the opportunities she herself has missed out on) has also rubbed off on her.

“It [education] is like having a magic wand,” says Room. “It can open so many doors…it’s like abracadabra, you know?

“If you’ve got qualifications or you’ve had experiences through training and development, it changes you and it gives you more choices.”

She admits that she is often close to tears at college awards ceremonies listening to stories of learners’ achievements – some of whom have overcome huge barriers to get to where they are.

And if there is one thing she hopes she has achieved during her time in the FE sector, it is helping to make that happen. “If I have given more people more choices and opportunities than they would have had, had I not been around, then that’s a wonderful legacy to leave.”