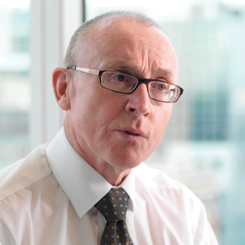 Sir Peter Rogers, special advisor to the Mayor of London

Sir Peter Rogers recognised the value of vocational learning at an early age. At 18, having researched possible routes into accountancy – seven years with a degree, four without – he decided to leave school and train on the job.

Brought up in Wolverhampton, Rogers, now Boris Johnson’s economic development advisor, attended Wednesfield Grammar School, and as one of the high fliers in his year group was expected to go to university.  Breaking the news to his working class parents – a furnaceman and a shop assistant – who already had made “big sacrifices” to support him in his education, was hard, but made perfect sense at the time.

“I guess I was quite self-aware,” he recalls. “I knew the sort of things that I was good at, the sort of things I was interested in and recognised the path that would get me to a reasonably good salary pretty quickly, through hard work and application.”

It was a move that paid off. Rogers spent 16 years in accountancy and financial roles in local authorities, before moving to a national transport operator, where he was involved with trade union negotiations as part of a management buyout.

In 1996, he joined Westminster Council, where he became chief executive, before moving to the London Development Agency (LDA), where he was awarded a knighthood for his work, something he still finds “embarrassing.”

Much of the hard work was down to people like Simon Milton (Johnson’s former chief of staff who died last year) and real partnership working between public servants and politicians, he says. “To be honest I really don’t know why I got it,” he says, modestly. “You start looking round at people who deserve it and I honestly couldn’t work out why I got it.”

While he is passionate about his home city of Wolverhampton (where he still has a home), and his beloved football team “The Wolves,” Rogers has a soft spot for London. In fact he came out of retirement to take on his current role (his second retirement, having bowed out of Westminister Council in 2008).

And he is clearly proud of the Greater London Authority’s (GLA) work on vocational learning. Since the launch of its apprenticeship campaign in 2010, an average of around 5,000 new vacancies have been created each month, he says, and he is confident the GLA can reach its target of 100,000 by the end of this year. Around 2,000 of those opportunities have been created within the GLC itself or through its procurement process with organisations like Transport for London (TfL) and Crossrail. The GLA is also working hard to increase take up amongst small and medium sized businesses to take on apprentices, he says.

It’s a simple challenge which is about communities taking care of their own futures by becoming involved in their own quality of life issues.”

While this represents an opportunity for London colleges, many will need to up their game and become “a lot more commercial,” says Rogers. “There is a challenge for FE to be much more aware of the business opportunities, the business dynamics and the community dynamics… but they need to actually start talking and competing with each other about the quality of their work, the quality of their product and the sustainability of what they’re achieving.”

Rogers advocates a system (similar to that proposed by the universities’ minister David Willetts) where colleges are “an open and transparent book,” publishing information about how many of their former learners move into employment and what exactly they go on to do.

He bats off the suggestion that the demise of the regional development agencies (RDAs) as a result of the Coalition government’s quango bonfire, could make this difficult for colleges. Things are tough for everyone involved in education and training at the moment, he says. “I think there’s a significant difference in the last few years because there was a lot of money in the system until the crash in 2008. There was lots of money, people could basically self generate work and self generate their own importance. Those days have gone, every scrap of public sector money now is going to be based on value created and it’s going to have to be demonstrated.”

And he sidesteps the topic of the London Skills and Employment Board (LSEB) the employer led group, chaired by Johnson, responsible for improving adult skills and employment in the capital, which seemed to inexplicably fade away about 18 months ago.

After the abolition of RDAs in June 2010, the government announced plans for the creation of local enterprise partnerships (locally owned partnerships between local authorities and businesses that aim to create local jobs and drive economic growth). Plans for London’s LEP, which will be chaired by Johnson and Harvey McGrath – chairman of the Prudential  – are well underway, and while Rogers admits the demise of the LSEB has left a gap, he will not be drawn on the reasons it seemed to end too suddenly.

Rogers is a big fan of the Big Society approach to rebuilding and regenerating communities, which he says is at the heart of Team London, the GLC new volunteering programme aimed at cutting crime and creating opportunities for young people. “It’s a simple challenge which is about communities taking care of their own futures by becoming involved in their own quality of life issues,” he says. “And if that means kids go out on the streets and pick up litter to make the place look better so the shops actually attract people, if it means they work with disadvantaged kids who can’t read by becoming readers, if it means that businesses and lucky graduates who are in jobs come back and either coach disadvantaged kids or help business by mentoring business…I think those are the sort of new dynamics, and I think colleges could be at the heart of that.”

But with youth unemployment at all all-time high, isn’t this just an excuse to get people to work for nothing, I ask him. “Is there anything wrong with that?” he fires back “How many people in January say ‘I’m going to lose weight, I’ll go to the gym four times a week’ – how many do it?” he says. “Not many. The ones that do have got an attitude about persistence, diligence and they put the discipline in to make it happen. It’s exactly the same as getting up five days a week and going to work..it’s about discipline, it’s about turning up, it’s about doing the work while you’re there and seeing the results – and it’s perfectly transferable into the workplace.”

He seems convinced that volunteering can unlock the potential of young people, creating the “rigour and discipline” necessary to get even hardest to reach into work.  But who exactly will run these community projects? While he has all the jargon – “champions,” “visible ambassadors” and “community leaders” – there are no firm answers for exactly who these people might be.

Having already made two comebacks from retirement, Rogers is relaxed about his future career plans. He’ll certainly be sticking around until the mayoral elections in May, the outcome of which will determine whether his contract at GLC is renewed. But despite a long and distinguished career in local government, his biggest ambition is surprisingly humble. “I’d like The Wolves to stay in the premier league – you can tell I’m a romantic, can’t you?”