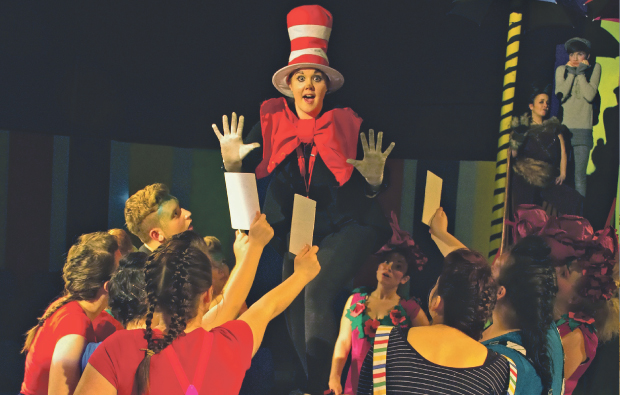 Warrington Collegiate students took to the stage to perform extracts from Seussical-The Musical in London at her Majesty’s Theatre, for Sunday Night Live.

Based on the books by Dr. Seuss, the children’s favourite musical showcased the rising talents of students studying musical theatre at the collegiate.

Ariane Sallis (17), from Golborne, who played Gertrude McFuzz and is applying for Drama School said: “London was inspiring.

“It gave me a flavour of industry expectations, but the hunger for more. Thank you to the tutors for making this opportunity possible.”

Previously, the Broadway hit Seussical-The Musical had been performed as an interactive and immersive experience for the audience.

In the all singing all dancing, lively production, performing arts and musician students at Warrington Collegiate played to packed houses daily performing 16 shows in a record breaking two week run.

More than 1,200 children and 1,000 adults enjoyed the show and the cast delivered 16 free community workshops in local schools.

Emma Garnett (19), from Winwick, who played the iconic Seuss character, the Cat in the Hat, said: “Performing a show to such a young audience really brought out a different side of my acting. I found the long run tiring but so much fun.”