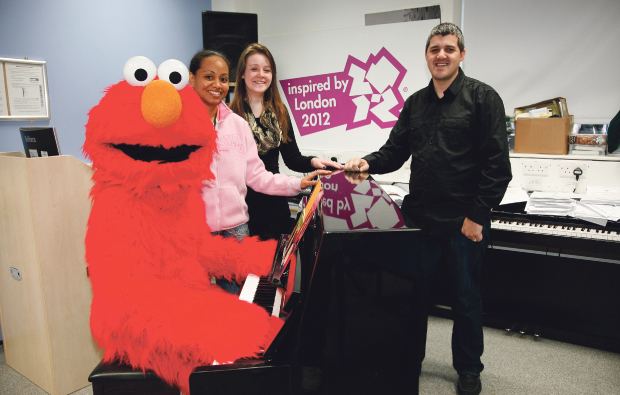 Students at Havering College of Further and Higher Education were more than tickled pink when Elmo from Sesame Street’s live touring show dropped in.

The irrepressible Muppet character visited the Ardleigh Green Campus in Hornchurch, Essex, to meet some of the students who will be performing alongside stars from Sesame Street at The London Palladium for one night only on March 26. The Havering College project is part of the Cultural Olympiad having been granted the Inspire Mark by the London 2012 Inspire programme.

The accreditation recognises projects that meet the values of the Olympics and Paralympics in terms of promoting respect, excellence, friendship and equality.

Inspiration will bring together 250 young people from Havering College and schools in Havering, Redbridge and Barking and Dagenham.

Music Practice degree student Lucy Murphy (20), from Hainault, will be performing Somewhere Over the Rainbow in Inspiration.

She said: “It’s very exciting. I’ve been fortunate enough to have had parts in previous college show in the West End.

“Appearing on stage at the London Palladium with Elmo will be a great experience.”