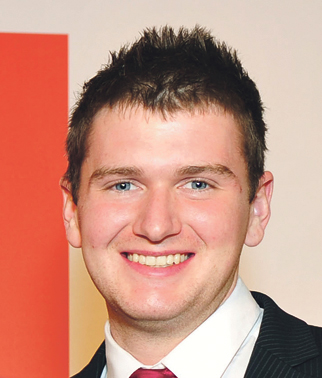 Like most youngsters, Ross Varnam was unsure about what to do after his GCSEs. Aged 16 and with 11 A to Cs behind him, his options were wide open.

He had enjoyed his time at Longslade Community College, in Leicester, but would A levels be the right move for him?

As is so often the case, Ross could turn to the wise words of his father Mitch – a former apprentice at British Gas, who is now a fireman.

“I’d done okay at school so there were options for me to stay and do my A levels and then go to university.

“But, for me, I wasn’t sure if that was what I wanted to do.

“My dad advised me and said ‘go out and learn a trade and learn a skill because you can still go to university afterwards’. I knew if I did it I’d always have that trade and no-one could take that from me.”

With an interest in motoring, Ross had already completed work experience at his local body shop, Parkers Accident Repair Centre. So it seems logical that this would be his immediate point of call.

He said: “I’d done two weeks experience when I was 14 at the body shop and volunteered during the summer to get a bit more work experience.

“When I decided I wanted to finish and leave school I went back to the body shop and asked if they wanted to give me a job and put me through an apprenticeship. It was a great opportunity.”

Within days of concluding his school days, Ross was into the big wide world of work, before enrolling on an apprenticeship. Over the next three years, he would undertake the Level 1, Level 2 and Level 3 NVQ in autobody repair, working four-days-a-week at the body shop with one-day-a-week at Leicester College.

“It’s a great mix of learning new skills, working and going to college with a group of people all doing the same thing,” he enthused.

“I enjoyed learning new skills and going to the body shop and showing them what I learned.

“The way you are trained keeps changing, so I was bringing new skills in and showing them how to do things.

“I got a bit of stick being the young lad, but they treated me very well.”

Although it was “brilliant” to finish his final programme, Ross, then aged 19, was hungry to learn. After a chat with his accommodating boss at the body shop, it was at that point Ross’ journey to WorldSkills London 2011 began.

He said: “The second I finished and left college, I missed it.

“I didn’t feel like I’d finished. I wanted to keep learning. So I spoke to my boss and he put me forward for the Young Panel Technician of the Year award.”

After competing regionally and nationally, Ross made the final six. Despite missing out on the title, he was scouted as one of three competitors to try out for the squad being put together to comprise Team UK at WorldSkills.

“It was fantastic,” said Ross, before adding: “It was disappointing that I hadn’t won but the fact it opened up the opportunity to other competitions was great.”

Ross was selected as part of Team UK in November last year and started “intensive training” to get to the required standard, while also working at the body shop. It meant he had little time for socialising – and he gave up drinking alcohol for a year to concentrate on the competition – dubbed the ‘skills Olympics’.

“It was such a relief to get into the team. I’d put so much training and hard work into it. I learned so much about the competition – I just wanted to compete on the World stage.

“My employer was really supportive. It was tough but it meant so much.

“I stopped drinking for a year which is hard when your mates are going out and having a great time.

“I stopped Thai boxing too, because they didn’t want me to break any bones.”

When competition day finally came around in October last year for WorldSkills London 2011, held at the vast ExCeL in London Docklands, Ross came face-to-face for the first time with his task ahead – a damaged Honda Jazz.

It was the same task for 16 other competitors, whose vehicles had dents to “within millimetres” of one another, with five modules to complete in four days.

And although he was nervous, Ross played his part in Team UK’s best ever WorldSkills performance by winning the silver medal.

“It was physically and mentally draining. As much as it was tiring, I loved being in that competition and going out there and doing my best.

“At the closing ceremony, I’d reached that point where I was thinking I’d done by absolute best and I’d done it. I didn’t know the result until on the night, but when I found out I’d got the silver medal I was over the moon.”

It was proud moment for Ross – and also for his family, who attended the closing ceremony, held at the O2 Arena, with t-shirts emblazoned with his name. He admits it was “a bit embarrassing” but “at least they were supportive”.

He added: “My dad was emotional because he knew how hard I’d worked. He was really proud of me.

“He couldn’t watch me during the competition because he found it too hard. He was pacing up and down the aisle.”

As well as leaving his own personal legacy on Team UK by securing his silver medal, Ross’ performance also helped secure an opportunity -of-a-lifetime. In the aftermath of WorldSkills London 2011, Ross – now aged 21 – was approached by a firm in Australia which owns 17 garages Down Under. Later this week, he will fly out for a 12-month tour of the nation to ply his trade and learn new skills – and experience life on the opposite side of the World.

He said: “When you finish WorldSkills you hit a wall. It’s a big event and you focus on it and then you think ‘what next?’

“Fortunately, I’ve been offered a post in Australia for 12 months as a working holiday. I can work two months at different garages and travel around the country.

“It’s a great opportunity,” he said, adding: “I’ll be on my own. I’m really excited, but nervous as well, but there will be lots of people like me out there.

“I felt bad for my employer that I’ll be leaving them. But he was good about it. He could see that it’s a fantastic opportunity.”

Although proud, it’s fair to say Ross’ mother, Lynn, who works in adult education at her son’s former school, will miss him the most.

“My mums upset that she won’t see me – but I’ve set up a Skype account to keep in touch.”