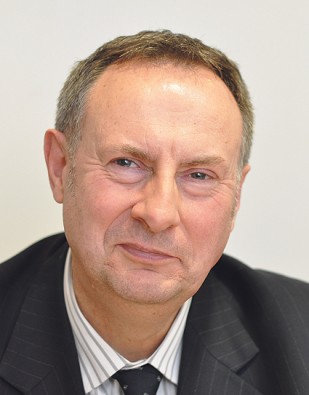 At 22, David Way found himself at a crossroads. Having recently completed a Masters degree, he had two job offers on the table – a graduate traineeship at the Department for Employment and an industrial relations role at an engineering firm in Peterborough.

He went for the former, he says – somewhat sheepishly – on the basis that he was far more interested in “making a difference to peoples’ lives” than helping turn out diesel engines. While quick to add that engineering can make a difference to peoples’ lives (something he will be sure to stress to the manufacturing summit he’s speaking at later this month, he jokes), he has never regretted his decision.

It started him on a path that has included senior jobs in the Department for Employment, the Learning and Skills Council (LSC) and the National Apprenticeship Service (NAS), where he is Chief Operating Officer.

The common thread running through his career is about helping people achieve their potential. What continues to drives him, he says, is the “belief that everyone has got some sort of creativity or talent that sometimes needs nurturing…” – something he learned early on in his own education.

Raised in the market town of Bridgwater in Somerset, Way came “top of everything” in primary school and flew through the 11 plus examination.

But grammar school took some getting used to. Conscious of being the first in his family to have any experience of “homework or exams,” (his parents were both factory workers with no formal qualifications), Way’s confidence – and his academic performance – began to wane.

“I just lost my way for a while,” he recalls. “It took me quite a few years to find my feet, and what I remember vividly was that one teacher taking a bit of interest in me…and suddenly I blossomed again.”

Having rediscovered his passion for learning, Way went on to study Economics and Technology at City University, followed by an MA in Industrial Relations at the London School of Economics (LSE).

To me, the key to irreversible growth of apprenticeships is quality.”

Within months of joining the Department for Employment, he was running a job centre in Bognor Regis. Five years on, he was strategy director at the Employment Service.

In 1990, following the end of his first marriage, Way decided to relocate to Wales, where he ran the employment service and became involved with a project helping Romania, which was just emerging from a communist regime – and experiencing high levels of unemployment as a result – to develop a business sector.

Seeing how another country coped with unemployment – and sharing his expertise about how it might be done better, was both fascinating and humbling, he says. “They [the job centre employees] opened the doors at 9am and people formed a queue. And at 6pm they closed the door and people just left.

There was no systematic approach to helping people and so to be able to tell them how they might be able to cope…and sharing that learning with fellow human beings who are in a less fortunate situation that yourselves… that was great.”

In 1998, Way relocated to the West Midlands, as director for the Department for Trade and Industry (DTI) where, two years later, he found himself involved in another high profile project.

As part of the Rover taskforce – which had the mission of saving the British car manufacturer from collapse – he found his life “being played out on the Today programme” every morning.

“I would get up, the news was about what we were doing, go to the meeting, eat bacon rolls…discuss and negotiate what the funding package might look like and how that would be spent,” he recalls. “You wouldn’t want to be dealing with the collapse of a big company like that but it was of such importance to the region and to be involved in it was really energising. But just very surreal, dealing with the main item on the news every day.”

An increasing desire to get closer to “real employers, real people and make a real difference” led him to join the Learning and Skills Council in 2001, as executive director for the Black Country where he faced the challenge of raising education standards and investment in training in an area characterized at the time by “poverty and lack of aspirations.”

Way – who was awarded a CBE for his work with young people last year – admits he is often close to tears at learners’ awards ceremonies.

One memory that sticks in his mind, is presenting a certificate to a checkout operator – a woman in her 30s – at a local supermarket. “I gave her this certificate for training and it was the first certificate she had ever had in her life and she broke down in tears because she was so proud of what she had achieved.”

The episode took him back to his own experience as a teenager, and the teacher who took him under his wing and helped him find his way again. “If you take an interest in someone, encourage and support them, find the things they are good at…who knows what they are capable of?” he says.

If his 35 years in employment and skills have taught him one thing, it is that “small steps” can lead to big gains. People can feel “overwhelmed and intimidated” by too much learning, especially if it means changes to their lifestyle.

The most effective way of reaching people is to take learning to them “in the local community or village hall” or find role models who can do it for you, he says.

His work with NAS has deepened his belief in the power of passing on knowledge and skills. But the last six months – when The National Apprenticeship Service has repeatedly come under fire for its role in funding and co-ordinating short, low-skill apprenticeships – have not been easy.

While he has felt at times that there was a need to balance the negative media coverage, a need for “another side” to be heard, the experience has taught him not to be too defensive, he says.

He admits that the NAS was not used to facing criticism but says that while “passionate about getting it right,” perfection just isn’t realistic. “I think we have learnt that what we absolutely need to do is to recognise that if you are delivering apprenticeships through 1,000 providers with 400,000 apprentices at any one time, not every single one of those experiences or those transactions is going to be 100%.”

But he is keen to stress that the NAS is keen to listen and that, having been in existence for just three years, there is still a lot to learn.

“What I really think we are trying to achieve is sort of critical mass of high-quality apprenticeships, so that there will be no possibility that in the future people will look back at 2012 and say that was the high water point.

To me, the key to irreversible growth of apprenticeships is quality. If we get half a million young people who had such a great experience of apprenticeships, they want it for their friends and their children, and employers want it for other employees…then we’ll have really achieved something.”