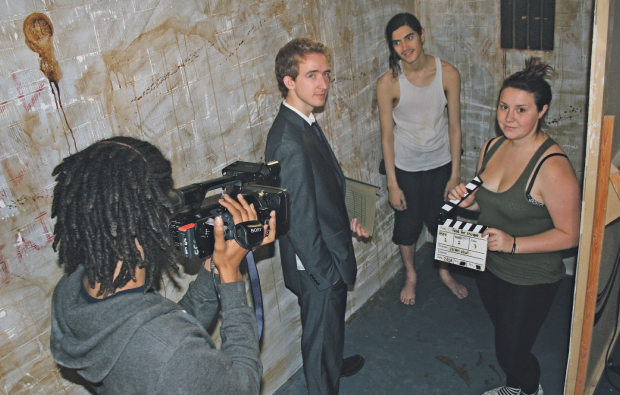 City College Brighton and Hove students from a range of different courses have collaborated on a new film project at the City College East campus.

Film-making students were given the chance to pitch their own short film ideas – all of which had to have a prison-based theme – to the rest of their class.

The three most popular ideas are now in production on set with their creators as directors.

To provide the sets for the films, painting and decorating students built a small prison cell set with adjoining corridor out of wooden frames, creating a brick-work effect on prison walls and doors with incredible detail.

Film students then decorated the bare set to look more natural with paint, graffiti on walls and even a suitably grim toilet.

College drama students and local actors have now been enlisted to star in the films, giving them vital on-set experience.

Film-making student Jordan Khan (19), director of the short film Food for Thought, said: “With these sets, we’ve got something that we wouldn’t normally have access to and having industry-standard equipment to work with, it really gives the project a professional edge.”

Fellow-director Emmet Holmes-Boyes (20) said: “I’ve had a chance to develop key skills I feel will be needed to succeed in the world of film.”