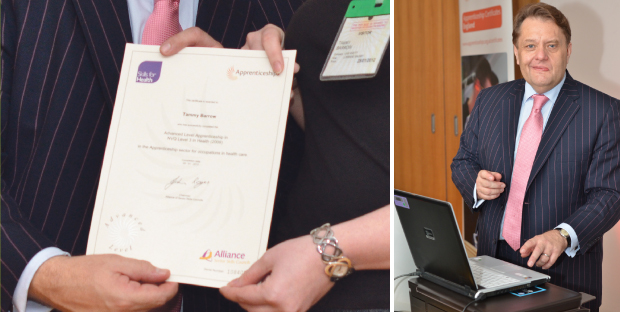 The new online certification system for apprenticeships, designed to reduce bureaucracy and improve quality, has been launched.

The cost per certificate is £22, which is lower than the £30 previously charged under the old system, and is defined by three foil seals: bronze, for an intermediate apprenticeship, silver, for an advanced apprenticeship, and gold for a higher apprenticeship.

The Alliance say the new centralised ACE system will save apprenticeship training providers and issuing authorities time, resource and investment and allow them to track the progress of candidates.

Although the cost per certificate has been set, the Alliance say it is “too early to say” if it will remain the same in the future.

A spokesperson for the Alliance said: “The Alliance will review these costs ongoing as part of the quality assurance processes that have been put in place.”

The Alliance has also revealed to FE Week that they could generate £4.4 million from the first year of the new ACE system.

The spokesperson added: “There are approximately 450,000 new apprentices in the system at any one time. However, it is important to note that some of these apprentices will be on three year programmes.

“It is expected that the number of certificates issued in the first year will be around 200,000. The money generated from this will be used to operate the new centralised system and resource the SSCs/SSBs who will be responsible for protecting the integrity of apprenticeship frameworks by checking each certificate request meets requirements of particular apprenticeship frameworks.

“We will keep costs under review and if the number of certificates issued rises. It may be possible to reduce the charge.”

The system was launched at the Department of Business, Innovation and Skills (BIS), by John Hayes, minister for FE who, with the click of a button, printed the first two certificates.

Mr Hayes said: “The government is restoring practical learning to its rightful place as a hallmark of personal attainment and national pride. Apprenticeships are a gold standard qualification and its right that the hard work of people who undertake them should be marked and celebrated.”

John Rogers, executive chairman of the Alliance, said: “Apprenticeships play an important role in the provision of a highly skilled workforce in England and it is vital that we ensure individuals have the right skills, at the right time, to ensure they are best-placed to take advantage of the opportunities that arise as the economy continues to recover.”

Prior to receiving her award, Tammy Barrow, who received a silver certificate for completing a Level 3 in health, said: “I’m really looking forward to it. I’ve got the confidence now to study and progress in this field.”

Pietro Dirienzo, who passed his Level 2 in plumbing and heating, added: “It’s surreal being here. It’s all happened so quickly but it’s very exciting.”